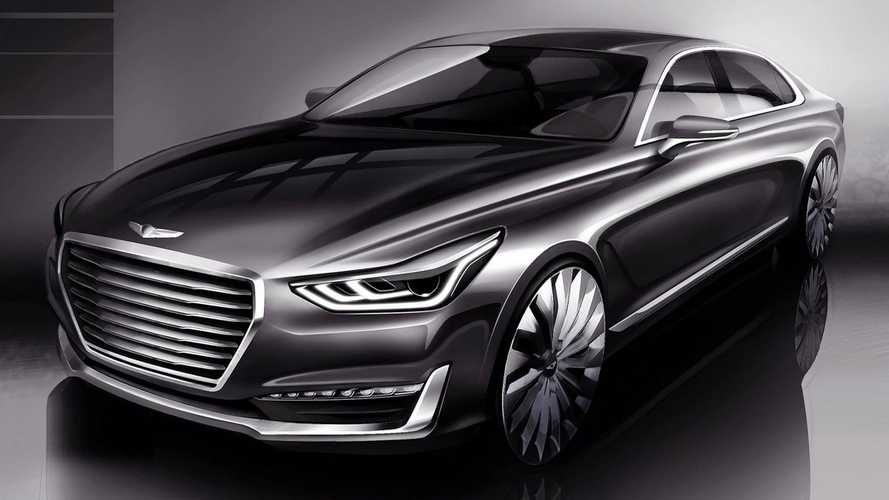 Hyundai’s newly founded Genesis luxury division has released a teaser depicting the G90 sedan which will sit on top of the range.

Hyundai’s newly founded Genesis luxury division has released a teaser depicting the G90 sedan which will sit on top of the range.

Who would have thought a few years ago that we’d be talking about a fully fledged luxury model from Hyundai? It’s about to happen as the Equus will soon be a thing of the past since it is going to be replaced by this, the first ever Genesis G90. It will be a taste of what's to come from the Genesis sub-brand which by the end of the decade will encompass a total of six models.

It’s being described as an “elegantly designed” and “technology packed” sedan featuring a new design language that expresses an “athletic elegance.” The attached renders certainly look very promising and show a low-slung sedan with an elongated hood and a narrow greenhouse while the stylish large alloy wheels make it look more upscale. The front end is dominated by that huge grille flanked by a pair of stylish and “sophisticated” LED headlights as well as horizontal strips of daytime running lights.

Effectively replacing the Equus, the G90 is basically a production version of the Vision G concept and will be followed by the G80 which will act as a successor of the Hyundai Genesis. There’s also going to be a smaller G70, along with a coupe, a mid-size crossover and a large SUV.

The G90 will first go on sale at home in South Korea at the beginning of next month and will be available there as the “EQ900.”