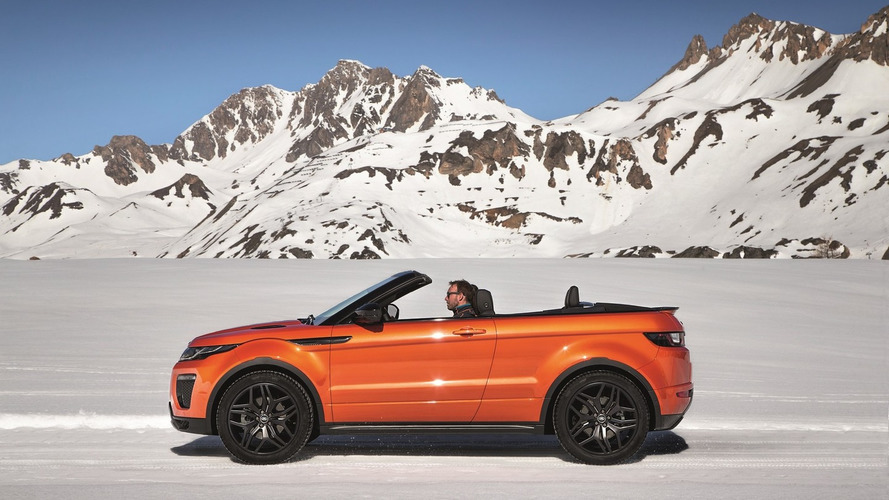 After a lengthy teaser campaign, Land Rover has finally revealed the Evoque Convertible in production guise and it will go on sale mid-2016 in more than 170 countries.

After a lengthy teaser campaign, Land Rover has finally revealed the Evoque Convertible in production guise and it will go on sale mid-2016 in more than 170 countries with production set to be limited.

Previewed by a concept dating back to early 2012, the open-top Evoque keeps the good looks of the regular version, but eschews the fixed metal roof to make room for a fully-automated retractable roof that was designed to maintain the original shape. The Z-fold mechanism lays flush with the rear end to enable a clean look when the roof is down. The soft top can only be had in Ebony Black and combined with a choice of 13 colors for the body, including the newly added Waitomo Grey metallic and Baltoro Ice.

Operating the roof via a center console button can be done at speeds of up to 30 mph (48 km/h) and it will take 18 seconds until it’s folded and 21 seconds to raise it back. Land Rover promises the layer of acoustic insulation implemented in the Evoque Convertible will grant the vehicle the same level of comfort you will find in the regular five-door Evoque. It comes with an easy-to-install rear wind deflector that sits between the rear three quarter trim panels and boosts comfort when the roof is stowed. Regardless if the top is up or down, the high-riding cabrio offers a decent cargo capacity of 251 liters (8.9-cu. ft.).

As standard, the 1,936 kg (4,268 lbs) Evoque Convertible will come with halogen headlights, but those willing to upgrade can opt for xenon or full LED adaptive headlights that have a new design compared to the regular Evoque facelift. Regardless of choice, all cars have LED daytime running lights and taillights as standard.

The interior cabin was essentially carried over from the standard Evoque and can host an optional 10.2-inch InControl Touch Pro infotainment system whereas the standard setup has an 8-inch screen. An optional 12-speaker 660-watt Meridian sound system is available for those who want to upgrade from the standard 10-speaker 380-watt Meridian unit. There are numerous goodies offered inside, such as rear-seat climate control, Wi-Fi hotspot, parking cameras, Android Auto and Apple CarPlay support along with plenty of online apps.

More importantly, a new seat airbag system combines thorax and head airbag for the front seats while the sophisticated electronic systems make sure the airbags and the roll-over protection system won’t be deployed in extreme off-roading situations, although it’s highly unlikely owners will take the Evoque Convertible on very bumpy roads. If they do, the car’s standard Terrain Response system with its four modes (General, Grass/Gravel/Snow, Mud/Ruts and Sand) will ensure utmost grip and control. There’s also a standard Hill Descent Control system and you can also get Hill Start Assist for even more electronic aids.

On sale mid-2016, the Range Rover Evoque Cabrio will carry a starting price of $50,475 in United States, excluding the $995 destination and handling fees.