It will be significantly different than the Nissan Armada.

The Infiniti QX80, while very capable in general, is one of the oldest vehicles currently available on the new car market in the United States. It was refreshed with new tech for the 2022 model year (see the related links below) but is already showing its age and dated bones. A brand new QX80 is currently under development and it will have a much more important role than just replacing its predecessor. The brand’s flagship SUV will introduce a new design language for the automaker, both inside and out.

This information was unveiled by Infiniti Chairman Peyman Kargar, who was appointed Infiniti’s global brand boss in June 2020. Just recently, he had a chat with Automotive News and confirmed the new QX80 will signal a new era for the premium manufacturer. It will ramp up the performance specs of the model to further distance it from the Nissan Armada, with which it shares its underpinnings and technologies. The ultimate goal for Infiniti is to launch the new QX80 as a more adequate direct rival for luxury SUVs like the Land Rover Range Rover and Lexus LX.

The new QX80 will be the first of several next-generation Infiniti products that should reboot the brand image, both visually and in terms of quality and performance. This means a new corporate face will be put on the upcoming models, which will make its debut on the flagship SUV. Accompanying this new visual identity will be a new dealership identity for retail stores, though it will only be a recommendation and not a full redesign of the existing facilities.

The next major step in Infiniti’s reboot plan will come in 2025 when the marque will launch its first fully-electric vehicle. It is expected to be an ideological successor to the Q50 sedan but with a zero-emissions powertrain. A small, EV crossover could also be launched shortly after the electric sedan, as well as a compact coupe-SUV similar in size to the QX60. Ultimately, Infiniti wants the majority, but not all, of its sales around the globe to come from battery-powered electric vehicles by the end of this decade. 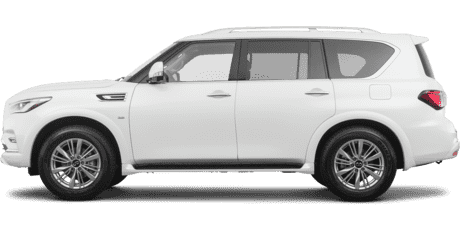