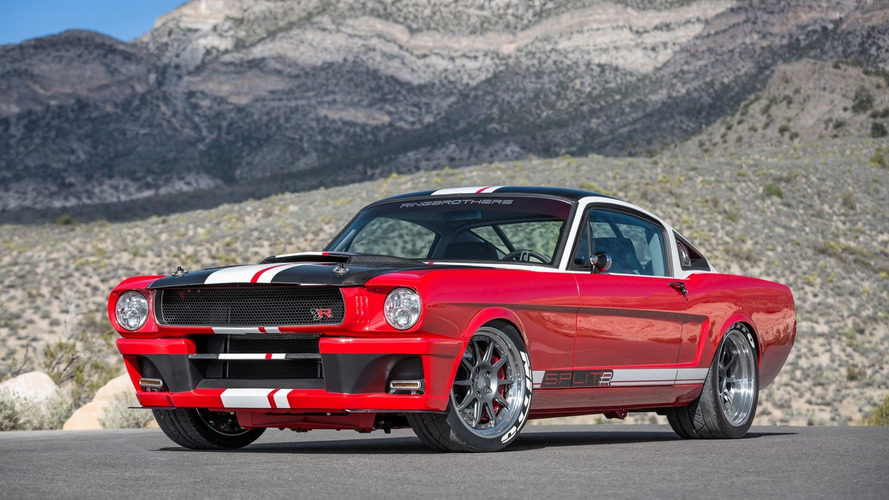 Ringbrothers have staged the world premiere of their 1965 Ford Mustang Fastback SPLITR this week at the SEMA show in Las Vegas.

Ringbrothers have staged the world premiere of their 1965 Ford Mustang Fastback SPLITR this week at the SEMA show in Las Vegas.

There are many tacky and downright odd cars on display at the ongoing Specialty Equipment Market Association (SEMA), but this is certainly not one of them. The car started out as a 1965 Mustang Fastback and was resto-modded by Ringbrothers and in the process it received the “SPLITR” suffix.

Work started on the body where the bottom of the front fenders has been trimmed while the rocker panels are now substantially beefier than before. The car now has a flat undertray (with the exception of the driveshaft tunnel) and has received an attractive Ford Race Red paint from BASF that benefits from a satin clear finish to make sure it’s not overly glossy.

After finalizing the exterior, Ringbrothers made some adjustments under the hood in order to accommodate a Ford Racing 427 cubic inch (6997cc) engine featuring a custom airbox and an MSD Atomic fuel injection system while the power transfer is done through Tremec six-speed manual gearbox.

Gone are the stock wheels as this ’65 Mustang Fastback has received custom forged HRE Wheels wrapped in Nitto Invo tires measuring 265/35/18 at the front axle and larger 305/30/19 for the rear wheels. The changes continue on the inside where Ringbrothers installed Recaro seats, Classic Instruments gauges, an IDIDIT steering column along with other aftermarket bits and pieces to create what they describe as being their latest “automotive masterpiece.”