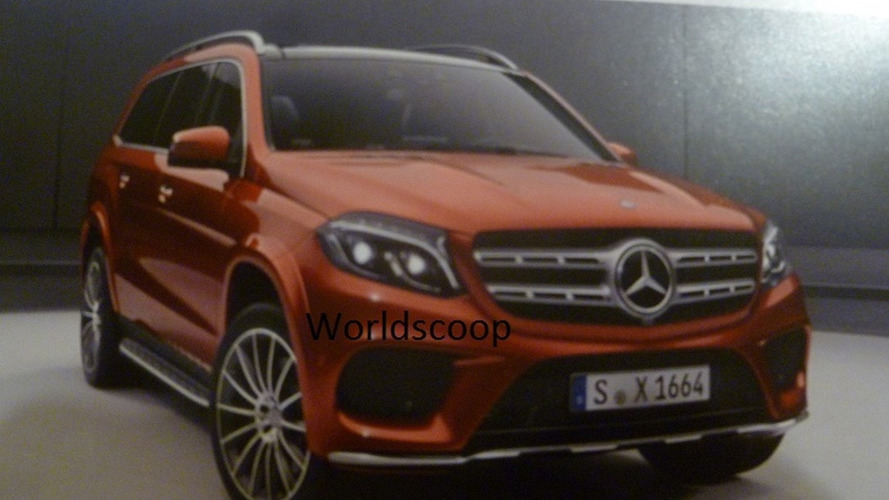 Another day, another leaked official image of the Mercedes-Benz GLS (GL facelift) and this time we are looking at the AMG Line version.

Another day, another leaked official image of the Mercedes-Benz GLS (GL facelift) and this time we are looking at the AMG Line version.

This latest image appears to be taken from a brochure and shows the facelifted GL with a new orange paint, although the person who uploaded the image says it’s actually red. The AMG Line version depicted here is addressed to those who want a sportier appearance for their large SUV which like the current crop of Mercedes-Benz models has the LED daytime running lights built into the headlights. This particular car seems to have a glossy black contrasting roof and comes with silver roof rails along with an aluminum front underbody protection.

The massive front grille hosts a large tri-star logo and revised double slats while the license plate below is clearly photoshopped. Other noticeable features include the multi-spoke large alloy wheels, aluminum side steps and a revised bumper with prominent air vents. The back of the car isn’t visible in this newest leaked official pic, but a few days ago we saw the GLS will have new graphics for the LED taillights, a slightly modified bumper and a different shape for the exhaust tips.

Expect a full reveal to occur in the coming days and most likely Mercedes-Benz will bring the GLS to the Los Angeles Auto Show later this month.