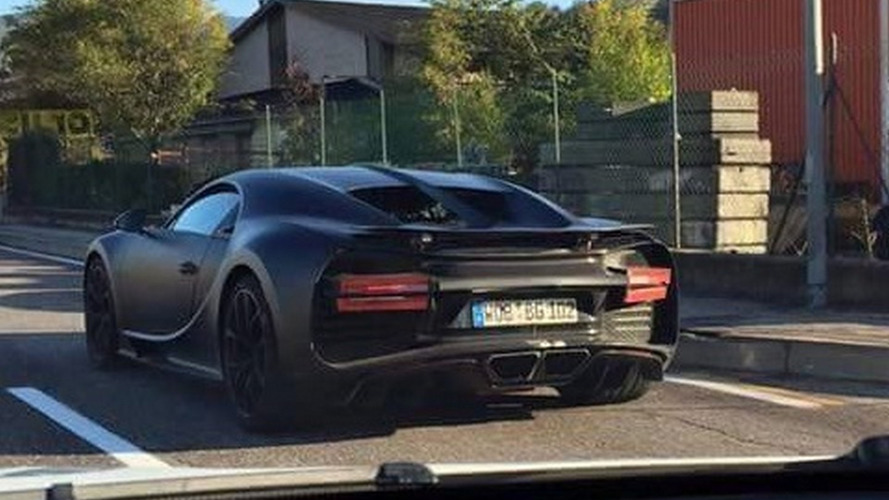 A couple of prototypes of the Bugatti Chiron wearing the production body were spotted roaming the public roads.

A couple of prototypes of the Bugatti Chiron wearing the production body were spotted roaming public roads.

Gone is the bulky rear end of the Veyron as Bugatti’s new masterpiece looks substantially sleeker and it’s easy to notice the design similarities with the spectacular Vision Gran Turismo concept that debuted last month in Frankfurt. There are actually two prototypes and these have different taillights, but most likely both of them are provisional and won’t make it to the production car set to be unveiled next year.

The rest of the car seems ready to hit the assembly line in Molsheim, France and as you can see it has a prominent rear wing and a central fin that extends from the roof to the hypercar’s back. Many of the bits and pieces will be made from carbon fiber to compensate the added weight commanded by the hybrid setup boosting total output to somewhere in the region of 1,500 PS (1,103 kW) coming from the W16 8.0-liter quad turbo engine said to take advantage of e-turbo tech.

The Bugatti Chiron is expected to show up in March 2016 at the Geneva Motor Show and it is believed only 500 units will be made, with each carrying an eye-watering starting price of $2.2 million which will make it around $1 million more expensive than its predecessor. Despite the exorbitant price tag, it is believed a “double-digit number of clients” have already placed an order for what will be the fastest production car ever made as Bugatti is targeting a 0-62 mph (0-100 km/h) run in a little over 2 seconds and a 280 mph (450 km/h) top speed.

Although the Volkswagen Group is cleaning up after the dieselgate scandal and they have announced plans to postpone and/or cancel models, the Chiron apparently isn’t one of them and will be out as scheduled, just like the much-debated Volkswagen Phaeton.