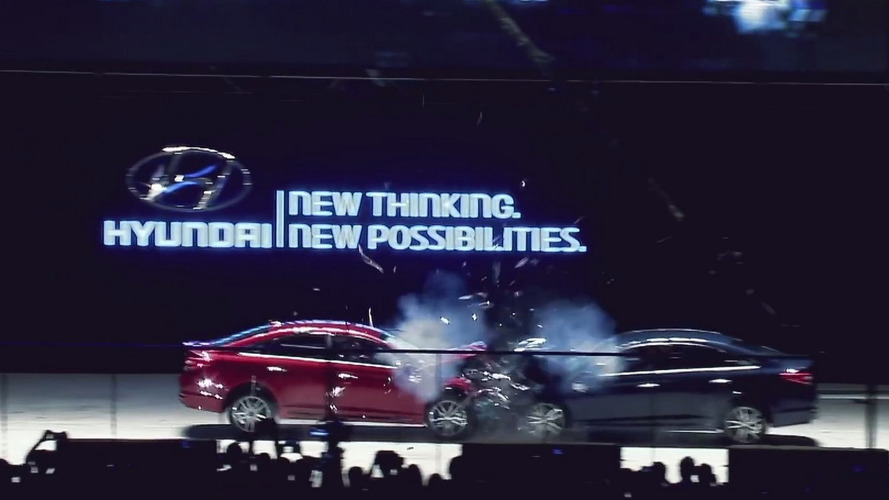 Hyundai has organized a crash test event between a US-spec Sonata and a KDM-spec Sonata to prove the cars are the same, regardless of where they’re made.

Hyundai has organized a crash test event between a US specification Sonata and a Korean Domestic Market (KDM) spec Sonata to prove the cars are the same, regardless of where they’re made.

In recent times, Hyundai customers in South Korea have been complaining about the quality of the locally produced cars, especially those who bought the mid-size Sonata sedan. To prove they don’t condone double standards, Hyundai decided to do a frontal collision between a 2015MY Sonata Turbo US-spec painted in Venetian Red and a 2015MY Sonata Turbo KDM-spec featuring a Lakeside Blue paint.

While the US-spec model is assembled in Alabama, United States, the KDM version is built by Hyundai at home in Asan, South Korea and with this video Hyundai demonstrated the cars will perform virtually the same in the unfortunate event of a frontal collision at 56 km/h (35 mph).

The crash test comes as a response to a survey conducted in South Korea in which 74% of the respondents said there would be differences in safety between the domestic and overseas models built by Hyundai. Automotive industry experts as well as car bloggers had the chance to analyze the vehicles following the crash and all of them confirmed there weren’t any differences between the two. The crash test dummies inside both cars sustained the same degree of injuries and those who checked out the vehicles said there weren’t any differences in steel stiffness between the two Sonatas.