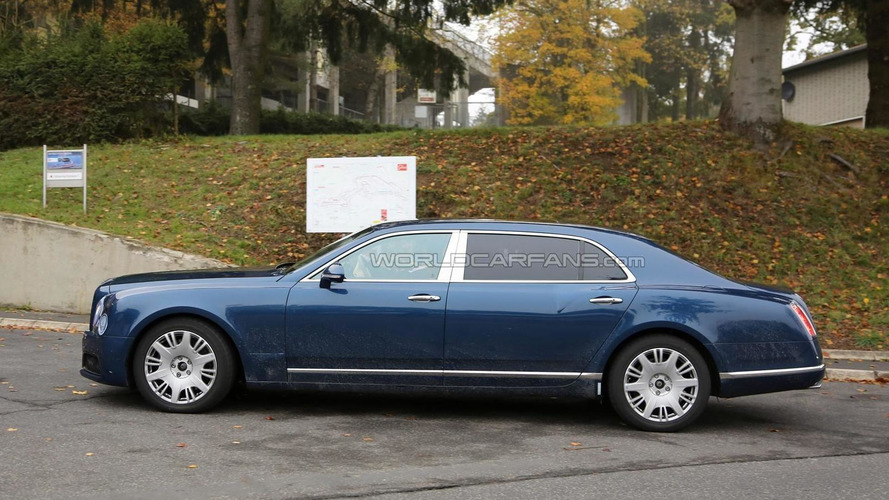 Our spies have sent us a comprehensive batch of images with the Bentley Mulsanne facelift and the brand new long wheelbase version.

Our spies have sent us a comprehensive batch of images with the Bentley Mulsanne facelift and the brand new long wheelbase version.

2016 is going to be a big year for the Mulsanne lineup as aside from the facelifted sedan Bentley has plans to launch a convertible along with a long wheelbase sedan spotted once again while undergoing testing. The SWB model is 5575 mm long and this LWB model appears to be at least 200 mm longer judging by that very long rear doors and the massive wheelbase.

Speaking of the wheelbase, in the Mulsanne SWB it is 3266 mm long and we expect most of the added length of the LWB to be implemented in the wheelbase to provide even more room for the rear passengers. The larger footprint will have an impact on weight which is set to grow considerably from the current 2,685 kg (5,919 lbs).

In terms of design, the 2016 Mulsanne will come with a slightly wider grille and modified front and rear bumpers while the outer headlights appear to sit higher than they do on the outgoing model and now they are in line with the inner lights. The lighting clusters will likely employ full LED technology and we expect some interior cabin changes as well, but nothing to write home about.

An official reveal of the facelifted Mulsanne and the new Mulsanne LWB is expected to occur in March at the Geneva Motor Show, with the Mulsanne Grand Convertible arriving before the year's end.