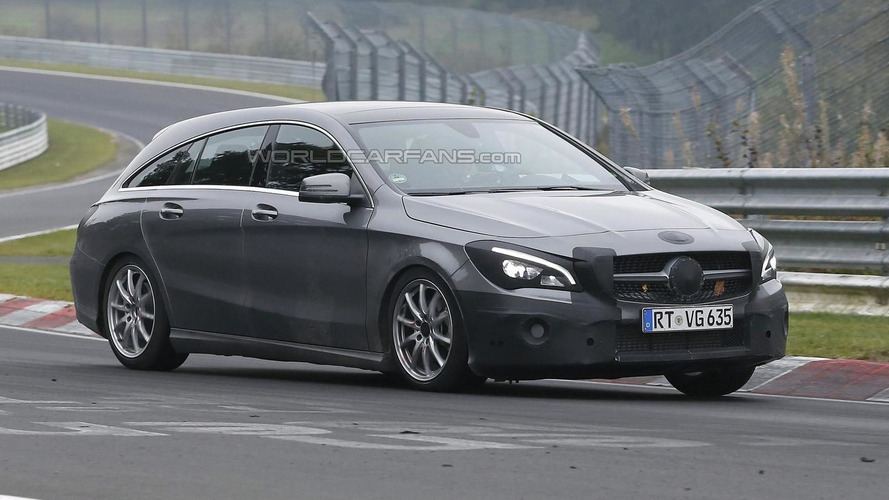 A lightly disguised Mercedes-Benz CLA Shooting Brake facelift was seen recently while performing some testing rounds on the Nürburgring.

A lightly disguised Mercedes-Benz CLA Shooting Brake facelift was seen recently while performing some testing rounds on the Nürburgring.

Almost four months ago, the A-Class five-door hatchback received a mid-cycle nip & tuck and now Mercedes is working on a similar array of revisions for the other members of the family. Seen here is the sleeker yet more practical Shooting Brake which will be offered for the first time with optional LED headlights that are going to come as standard on the AMG model which by the way has already been upgraded from 360 PS & 450 Nm to 381 PS & 475 Nm.

Judging by the small amount of camouflage applied on this near-production prototype, it's safe to say the styling tweaks will be kept down to a minimum as only the front bumper will be changed a little bit along with revised graphics for the lighting clusters. It's going to be the same story with the interior cabin which is bound to receive the A-Class facelift's galvanized switches, updated instrument cluster and the latest eight-inch infotainment system with Android Auto and Apple CarPlay.

German media is reporting Mercedes-Benz has plans to show the CLA and CLA Shooting Brake models in March 2016 at the Geneva Motor Show, with the facelifted GLA likely arriving before the end of the year.