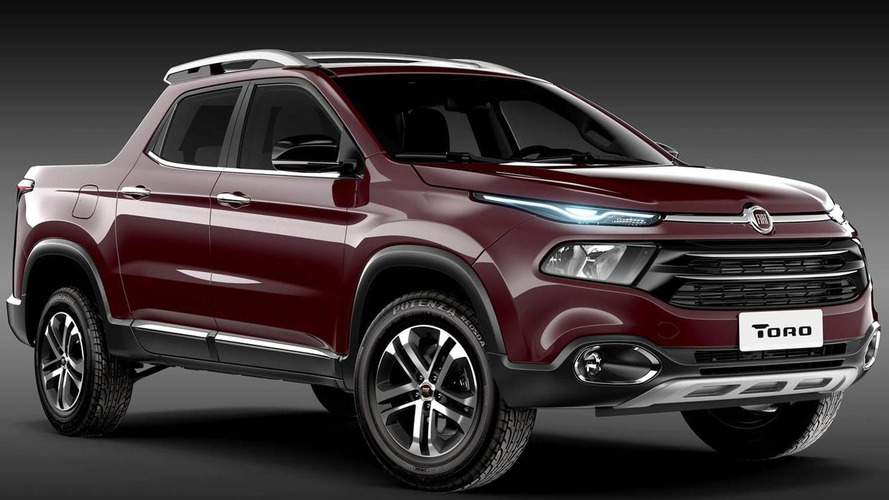 The utilitarian vehicle was spotted at the beginning of the month on the assembly line at the Pernambuco factory in Brazil and now it's making its official debut courtesy of an image released by Fiat's Brazilian branch. While the version photographed at the factory was a lower-end trim, this appears to be a range-topping model with LED daytime running lights, fog lights, faux aluminum underbody protection and numerous chrome accents.

Details are scarce at the moment, but Fiat Brazil does say it is 4915 mm long and can carry up to 1,000 kg (2,204 lbs) and five people "with the comfort of a luxury car." The double cab pickup truck is believed to be based on the Jeep Renegade and powered by a 138 bhp 1.8-liter and a 170 bhp 2.0-liter diesel coupled to both a manual transmission and an automatic gearbox sending power to the front wheels or to an optional AWD arrangement.

A full reveal of the production-ready Fiat Toro is expected to occur in the coming days, with sales to begin late 2015 or early 2016.

It will be offered with a 1.8 16v E-Torq Flex engine linked to a six-speed automatic transmission and a 4x2 setup while the 2.0 16v Multijet turbodiesel is teamed up to a six-speed manual and both a 4x2 and 4x4 arrangement. The diesel is also available with a nine-speed auto and in this case the Toro has a 4x4 layout.

For the Brazilian market, there will be three trims available: Urban, Adrenaline and Country. The base model has 16-inch wheels and can be had only with the flex fuel engine while the mid-range model also gets the diesel with the six-speed auto. These two trims are 4x2 only, so those who want 4x4 will have to upgrade to the range-topping Country trim and the diesel engine coupled to the six- or nine-speed auto. This flagship model comes with 18-inch wheels, dual-zone automatic climate control system, off-road suspension, Hill Descent Control and other goodies.