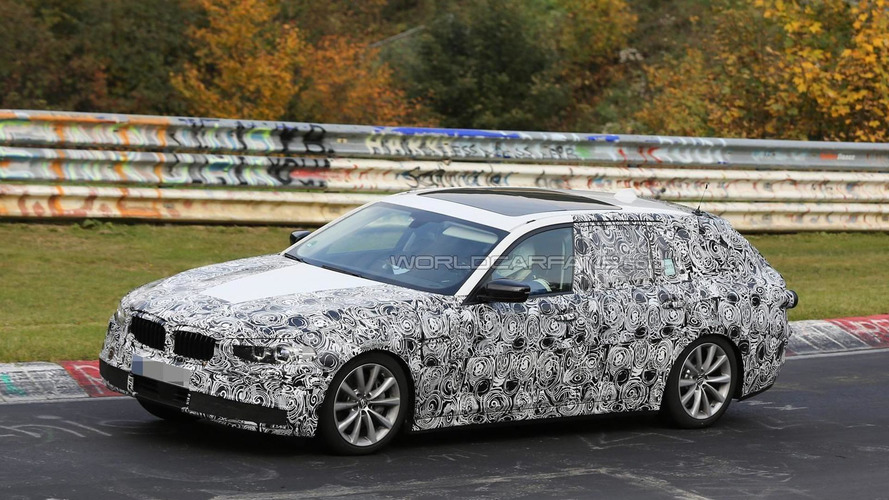 Spy photos show BMW has returned to the Nürburgring for additional testing of the next generation 5-Series Touring.

Spy photos show BMW has returned to the Nürburgring for additional testing of the next generation 5-Series Touring.

Recent spy images have shown the 5-Series Sedan (G30) carrying the production taillights, but the Touring (G31) is still stuck with the provisional rear lighting clusters. Once again, the prototype spotted has a plug-in hybrid setup as indicated by the second fuel cap mounted on the left front fender. Chances are it uses a hardware arrangement derived from the X5 xDrive40e, so it likely combines a 2.0-liter 4-cylinder combustion engine with an electric motor, an 8-speed Steptronic automatic transmission and a 9 kWh lithium-ion battery. In the hybridized SAV it's enough for 313 PS (230 kW) and 450 Nm (332 lb-ft), but some changes could occur in time for the hybrid sedan's launch.

As far as the design is concerned, the extensive camouflage applied onto this prototype hides an evolutionary look in the same vein as the 7-Series but obviously on a smaller scale. Since we're on the subject of size, the new 5 will likely grow a little bit compared to the outgoing model, but at the same time it should lose some serious weight thanks to the CLAR platform borrowed from its bigger brother which in this new application could bring an estimated 100 kg (220 lbs) diet.

Full LED headlights and taillights are a given while the interior cabin is likely to borrow some of the high-end goodies from the 7-Series. As a matter of fact, a digital instrument cluster and a larger iDrive controller have already been seen on a prototype, so the new technologies that debuted on the 7 will be trickled down to the 5.

Details regarding the engine lineup are scarce at the moment, but expect an array of 2.0-liter gasoline and diesel units, including the larger 3.0- and 4.4-liter motors. There's a new M5 on the way and for the first time could be offered with an optional xDrive all-wheel drive arrangement as an alternative to the traditional RWD layout.

Set to be revealed sometime next year, the 5-Series Sedan G30 and 5-Series Touring G31 will go on sale late 2016 / early 2017 and BMW has already announced some of the production will be outsourced to Magna Steyr's factory in Austria.