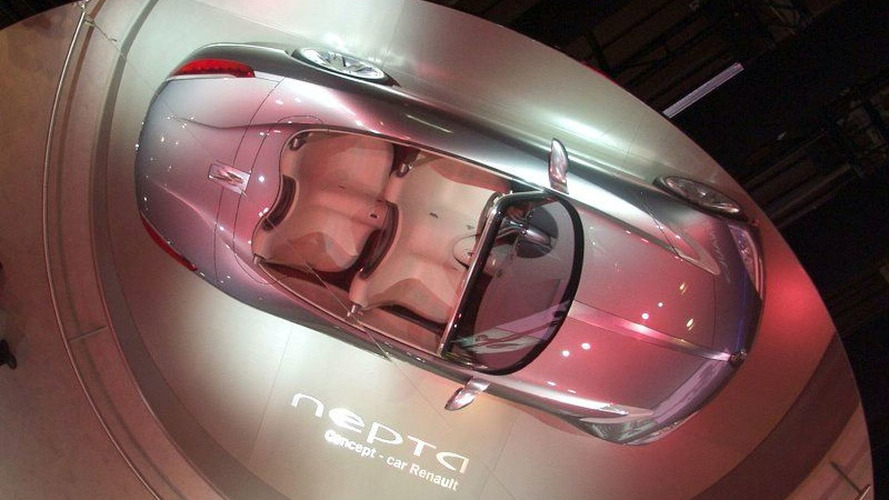 There'll be an end to war, famine and poverty before this concept car hits production, so perhaps it didn't deserve quite so much drooling from the domestic press. But if we step into fantasy land for just a moment, wouldn't it be cool if Peugeot followed Alfa's lead, ditched a few adverts for the limp-wristed 206 and actually made the 908 RC a reality.

Its sheer improbability left the 908RC thoroughly usurped by the one-make racer and Le Mans car revealed at the same show and covered in Part One of the Paris show round-up. But this V12 diesel-powered Batmobile is still pretty special and if any of these design cues make it through to the production cars then the Lion on the bonnet might not look so out of place.

Peugeot says the new 607 will hold many of these facets, but that just doesn't sound right at all. Maybe it will be the same length at five metres and it too may do without door handles, but don't expect much else to carry over.

Powered by the same 5.5-litre, 700bhp oil burner as the Le Mans car, mounted transversely in the rear, of course, it would fire this five-metre leviathan down the road like a bullet. The 0-60mph dash takes just three seconds and this huge boat could top 186mph - not bad considering the luxury interior. Then again, it does come with 885lb/ft of torque.

It's a fantastic concept, they just need to go and build the thing now, just one, and we'll love them forever. Audi felt obliged to build the R8 after peer pressure, so anything is possibleÃƒÆ’Ã‚Â¢ÃƒÂ¢Ã¢â‚¬Å¡Ã‚Â¬Ãƒâ€šÃ‚Â¦

And the same goes for Citroen's C-Metisse, which looks so good that photographers would have asked Kate Moss to move aside if she stood in front of the thing naked. The back end may be vaguely reminiscent of a Reliant Scimitar, but when it's grafted to this front end it all works like a charm.

With a V6 diesel combined with two electric motors at the rear wheels, the C-Metisse has all the torque we'd ever need and can hit 155mph despite the unconventional power sources.

Underneath the swooping lines and Earth-loving powerplants, the Metisse should form the basis of the next generation C5. And while we'd love to think the gullwing doors will make it through, you have to bet against it.

Chevrolet's Ultra WTCC concept is an inside look at the future of the Lacetti, too, if you believe the marketing hype. Fortunately we don't. If you listened to them then this is the next gen Lacetti if you remove the high waistline and the overtly aggressive scoops and bulges. Which translates as: "Take absolutely everything interesting off the car, sanitise it to the point that it's a totally anonymous tin-box with the personality of an accountant who plays computer chess and you have the next gen Lacetti."

A pair of angular headlights, which is probably all it will keep, is like said accountant donning a hilarious Simpsons novelty tie - it isn't enough.

The Renault Nepta is another bizarre concept with future styling cues as its raison d'etre. Gullwing doors run the length of the car and expose the almighty 3.5-litre, 420bhp V6 every time they open, which probably isn't going to make it to the production line. The car was modelled on a sailing boat, which explains the proportions, and about the only useful stuff was to be found on the interior with a new approach to ergonomics and a slick multimedia centre.

So the engine, the seven-speed gearbox attached to it and the cockpit are great. As for the rest, well CAR magazine has labelled it the French answer to the Bentley GTC, which suggests the staff went to Paris and wrote the issue while blasted on Renault's ChampagneÃƒÆ’Ã‚Â¢ÃƒÂ¢Ã¢â‚¬Å¡Ã‚Â¬Ãƒâ€šÃ‚Â¦

The RenaultSport 230 F1 Team R26, which hits 60mph faster than you can say its name, was also in attendance. Aimed at track day enthusiasts and featuring a limited slip diff it comes with a 230bhp engine, a tweaked Megane Cp chassis and Brembo brakes. Anyone that hankers for the Clio Williams of the old days will love this car

Ford, meanwhile, could take the shiny wheels off its Ford Mondeo 'concept' and that's next year's car in the flesh. The Blue Oval didn't claim it had a 12,000,000bhp diesel engine, or would run on vegetable matter, it's just the new car with a few shiny bits that will probably get shaved off by the penny-pinching accountants.

There are elements of the S-Max's 'Kinetic Design' in there, with what Ford calls an aggressive front end. Bottom-feeding fish-faced would be another way of putting it, although that wouldn't work so well in the marketing material and the rest of the car is pretty cool as volume sellers go. Be sure it will drive like a dream, as the Blue Oval continues to leave its obvious rivals for dead on the involvement front.

As will VW, if the new IROC concept's performance backs up its looks. This is the basis of the all-new Scirocco, which is even cooler this time round. The original set pulses racing and was a serious sports coupe, and this one has even more potential.

VW would be wise not to mess too much with the Coupe's seductive lines between now and the 2008 production deadline, as anybody with a pair of eyes in their head loved the three-door coupe.

Skoda's Joyster was slightly less seductive, but very cool in its own right and offers more interior space than Dr Who's Tardis despite being smaller than the Fabia.

Looking like a toned down Fiat Multipla it's Skoda's first three-door for 25 years and has a good chance of hitting the production line. The can holder in the rear seats will probably fall by the wayside by then and it did smack of a sponsorship deal gone sour as the clearly Red Bull-sized containers were left unbranded on the show car. Still, it's a useful car aimed at the youth audience that is steadily converting to Skoda's low price, high quality approach to motoring.

The concepts were a mixed bag then. Some made us drool, some made us angry, some made us simply ask why? We all know that Peugeot isn't in the supercar business and Renault isn't going to build a road-going boat, intentionally anyway, but still they added some colour to the show and gave the designers a chance to show what they could really do if cost and reality didn't intrude.