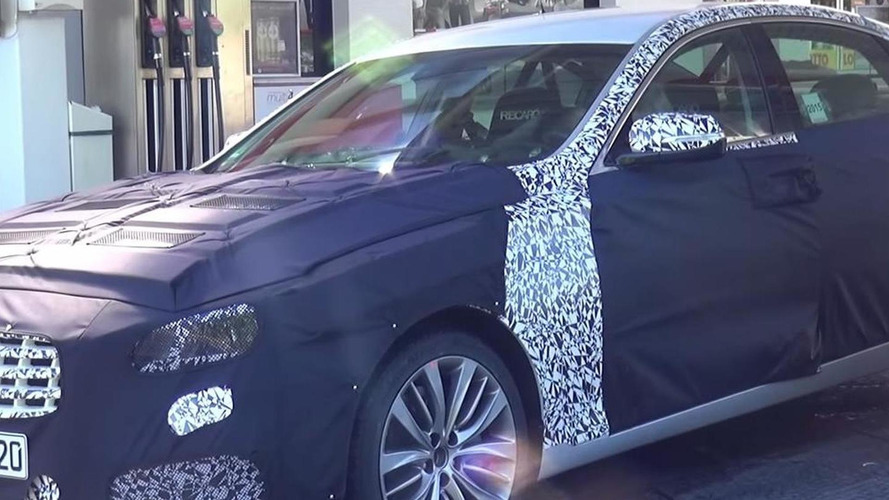 A full camouflaged Hyundai Genesis facelift prototype was spotted at a gas station near the Nürburgring.

A full camouflaged Hyundai Genesis facelift prototype was spotted at a gas station near the Nürburgring.

The test driver certainly wasn't too fond of the car spotter's prying eyes as after refueling the vehicle he took off in a hurry and tried to intimidate the cameraman by driving very close as if he deliberately wanted to hit him. Thankfully, that wasn't the case as in the end it was just a form of bullying which was really uncalled for taking into account the man with the camera didn't do anything illegal.

Getting back to the car at hand, you will notice it had a full-body disguise and a fake left exhaust tip while up front it featured a Chrysler 300C-like grid-styled pattern grille which we don't know for sure whether it will stay there on the production car or not.

The biggest news concerning the facelifted Genesis is the adoption of a turbocharged engine believed to take the shape of a twin-turbo V6 that will have either a 3.3- or a 3.8-liter displacement. Some say it will replace the naturally aspirated V8 5.0-liter and is set to generate the same 420 bhp (313 kW) output, but with significantly lower fuel consumption and CO2 emissions.

Hyundai will probably introduce the revised Genesis in the second half of next year as a 2017MY.