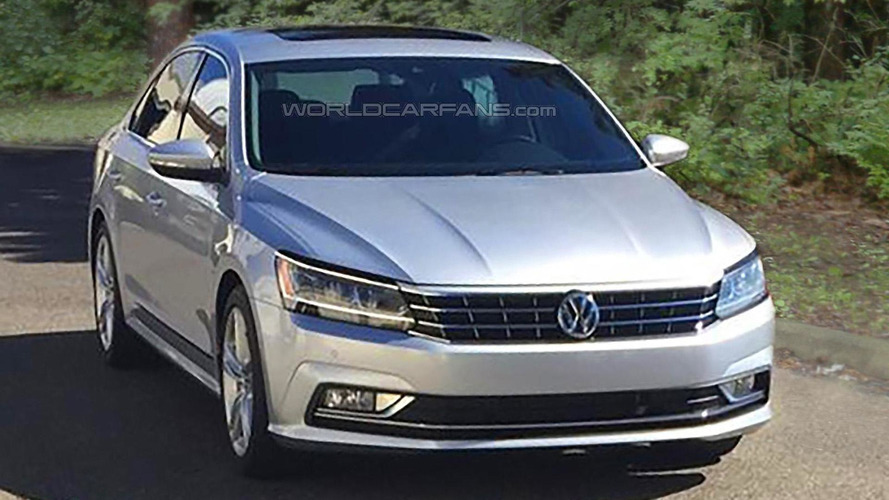 The facelifted Volkswagen Passat US-spec has been caught on camera camo-free during a photo shoot.

The facelifted Volkswagen Passat US-spec has been caught on camera camo-free during a photo shoot.

The Euro-spec Passat B8 went on sale in Europe more than a year ago, but Americans are still stuck with the old version which is about to get one last nip and tuck. Seen here is the mildly revised 2016MY US-spec model which as Volkswagen of America promised, comes with revised headlight and taillight graphics. The front and rear bumpers have also gone through some minor changes while those alloys appear to have a fresh design.

We know for sure the American Passat will have a "more premium interior with an enhanced instrument panel" along with a "full suite of infotainment and driver assistance features.", according to a VW representative. Chances are the mid-size sedan will receive support for Android Auto and Apple CarPlay as well as other tweaks to keep the model alive until the next-gen finally hits stateside.

It's highly unlikely Volkswagen will make any changes in the engine department so late in the model's life cycle, so expect to find the same 1.8-liter turbo with 170 bhp and a beefier 3.6-liter V6 with 280 bhp while on the diesel side there will be a 150 bhp 2.0-liter Clean Diesel which is the subject of an investigation by EPA as VW is accused of cheating during the emissions tests.

The 2016 Passat facelift US-spec is programmed to go on sale this fall and pricing should remain just about the same as the 2015MY which begins at $21,340.