The location is key to identifying this camo-covered prototype.

The current-generation Honda Pilot is getting a bit long in the tooth. It dates back to 2016, and aside from a facelift for the 2019 model year, it hasn't changed much. We haven't heard much about the next-gen SUV, but this heavily camouflaged prototype suggests big changes are coming soon.

We have the folks at TFLnow to thank for this spy clip. They received images and a video from a person in Ohio, who captured this test vehicle at a gas station. The location is significant, as Honda's operations are based in Ohio and this prototype has a license plate from there as well. That adds authenticity to this being a next-gen Pilot as opposed to an SUV from another brand. 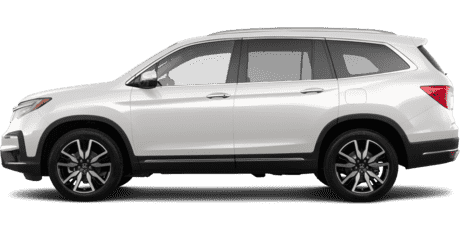 Visual cues also support this being a new Honda Pilot. The overall shape is quite similar to the current model, notably in the way the roof gently slopes at the back. Looking closely at the camouflaged front clip we can almost see a bold Honda logo in the center of a much larger grille, with narrow headlights flanking it. Further down on the fascia's corners we see vertical body lines behind the camouflage, suggesting the Pilot will adopt vents and driving lamps similar to the Passport, which just received a facelift for the 2022 model year.

Heavy camo makes it tough to identify details along the sides or rear. However, rectangular dual exhaust outlets are clearly visible, and the design is similar to the Acura MDX. We've heard the new Pilot will share a platform with its upscale Acura sibling, which entered its fourth generation for the 2022 model year. As such, it's possible at least one of the Pilot's engine options will be a carryover 3.5-liter V6, which also serves the current MDX with 290 horsepower. There's also the MDX's turbocharged 3.0-liter V6 making 355 hp, though that will likely remain the domain of Acura. A hybrid model should arrive eventually.

Honda has done a good job of keeping the new Pilot under wraps, literally and figuratively. Given the level of camouflage seen here, we suspect a reveal is still a few months away at the very least. If it comes sooner, that would make it a 2023 model-year vehicle. But don't rule out a later reveal for 2024.