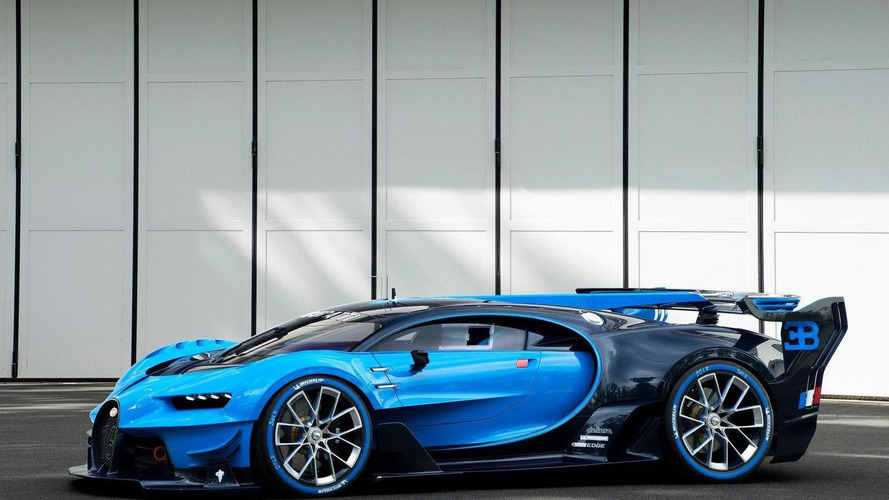 Based on the digital car created exclusively for Gran Turismo 6, the physical Bugatti Vision Gran Turismo "marks a new chapter in the luxury brand's history that will culminate in the unveiling of the new Bugatti super sports car."

Bugatti has unveiled the Vision Gran Turismo at the Frankfurt Motor Show.

Based on the digital car created exclusively for Gran Turismo 6, the physical Bugatti Vision Gran Turismo "marks a new chapter in the luxury brand's history that will culminate in the unveiling of the new Bugatti super sports car."

Designed to preview the styling language that will be used on the highly-anticipated Veyron successor, the Bugatti VGT has a familiar design but is markedly more aggressive than the Veyron as it features a sporty front fascia with a massive splitter and slender LED headlights.  Moving further back, there's ventilated front fenders, carbon fiber canards and a prominent rear wing.

Designers were also mindful of the company's past as they incorporated a center fin that recalls the 1936 Type 57 Atlantic and a classic two-tone exterior that echos the Type 57 G Tank which won the 24 Hours of Le Mans in 1937.

While some Vision Gran Turismo concepts are pure fantasy, the Bugatti VGT is grounded in reality as the company says the "car's technical features, like its design, are realistic."  In order to achieve this, designers and engineers worked hand-in-hand for six months to perfect both the car's styling and performance.  As Bugatti design boss Achim Anscheidt noted "Given the nature of the project, our concept car for Vision Gran Turismo is overstated and pushes performance to the limits, but its progressive design language will clearly show the direction that Bugatti's design will take in the coming years."

The interior wasn't left out either as it features leather / suede upholstery, matte and blue carbon fiber trim as well as two convex displays which promise to improve readability.  The steering wheel display shows vehicle information, while the steering column display "combines the images from the three cameras mounted on the exterior of the vehicle to provide the driver with a better overview for an even safer driving experience."

Bugatti was coy on performance specifications but confirmed the car has a W16 engine and a four-wheel drive system.  They also revealed that their calculations show the car could hit speeds in excess of 400 km/h (250 mph) on four sections of the virtual Le Mans track.