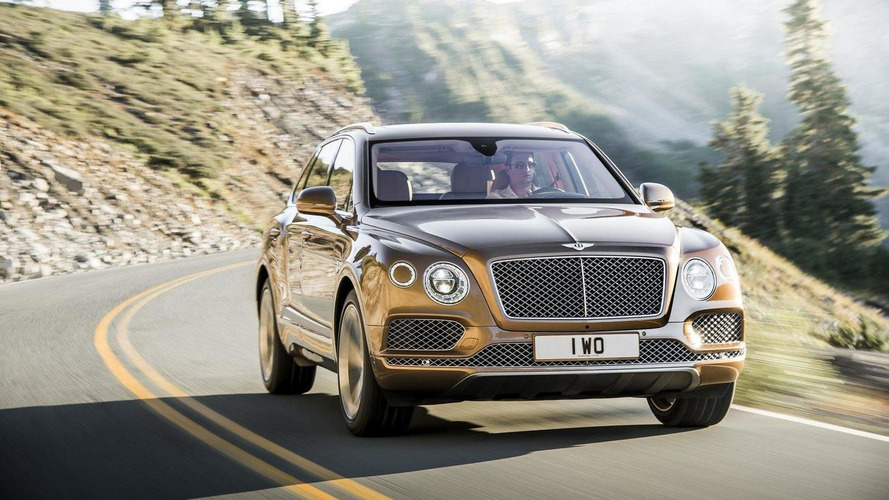 Described as "the fastest, most power, most luxurious and most exclusive SUV in the world," the Bentayga follows in the footsteps of the EXP 9 F concept but adopts a new front fascia which closely echoes the one of the Continental GT and Flying Spur.  The crossover also has LED headlights, a front skid plate, B-shaped front fender vents and muscular rear haunches.  Other notable highlights include aluminum roof rails, a slightly awkward rear end and 20- to 22-inch alloy wheels,

The exterior styling won't win everyone over but Bentley says the aluminum-intensive body provides 236 kg (520 lbs) of weight saving compared to a traditional steel construction.

The interior is far more traditional as it has a familiar split cockpit design with premium leather upholstery and a choice of seven different veneers.  Drivers will also find metallic accents, an infotainment system with an eight-inch display and 22-way adjustable front seats with heating, ventilation and massage functions.

The model also has a standard panoramic glass roof which is split into two panes.  The front panel tilts and slides, while the rear panel is fixed.  When the sun is too bright, the entire glass surface can be obscured via an electric full-length roller blind.

Bentley will also offer a four-seat variant that features two individual rear seats which are 18-way power adjustable and come with heating, ventilation and massage functions as well as integrated footrests.  The seats are separated by a small center console which has cup holders, storage compartments and USB charging ports.

On the topic of options, there are plenty including a 1950 watt Naim for Bentley Premium Audio system and Bentley Entertainment Tablets.  The latter are stylish 10.2-inch Android tablets with 4G, WiFi and Bluetooth connectivity.

The first deliveries are scheduled for early next year but there's no word on pricing.