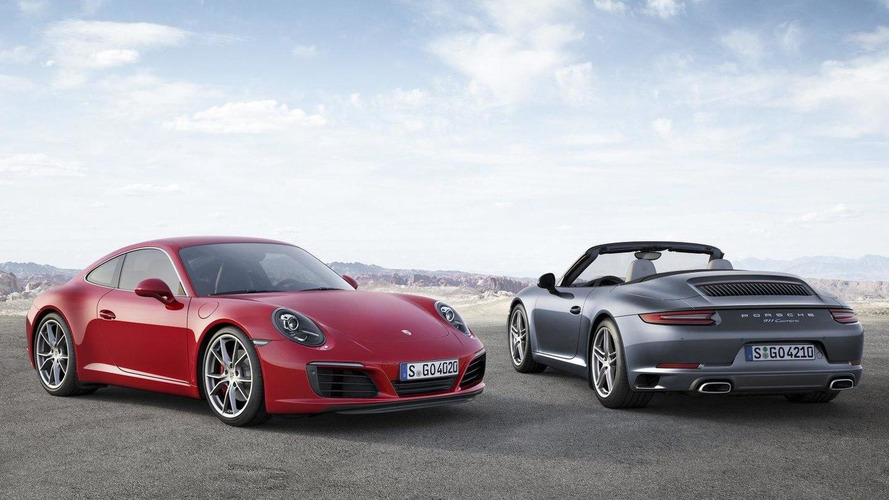 Porsche has unveiled the facelifted 911 Carrera, ahead of its debut at the Frankfurt Motor Show.

Porsche has unveiled the facelifted 911 Carrera ahead of its debut at the Frankfurt Motor Show.

The interior also gains a new smartphone tray in that is integrated into the center armrest.   The tray has an integrated charger as well as "optimized mobile phone reception."

The facelifted Porsche 911 has several new and updated features including:

Models equipped with the Sport Chrono Package also gain a revised steering wheel with a mode switch that has a rotary ring for selecting the four driving modes:  “Normal”, “Sport”, “Sport Plus” and “Individual”.  Models with the PDK transmission also receive a "Sport Response Button” that pre-conditions the drivetrain for maximum acceleration for 20 seconds.  When the button is pressed, "the optimum gear is engaged and the engine management [is] adjusted to an even more spontaneous response for a short time."

When equipped with the PDK transmission and the Sport Chrono Package, the 911 Carrera Coupe can accelerate from 0-100 km/h in 4.2 seconds.  The 911 Carrera S Coupe can accomplish the same task in 3.9 seconds before hitting an increased top speed of 308 km/h (191 mph).

Despite the improved performance, the models are approximately 12 percent more efficient than their predecessors.  This will pay dividends at the pump as the 911 Carrera S - with the PDK transmission - now consumes 7.7 L/100km which is an improvement of 1.0 L/100km.

The facelifted Porsche 911 will be launched in Germany on December 12th and pricing starts at 96,605 euros.