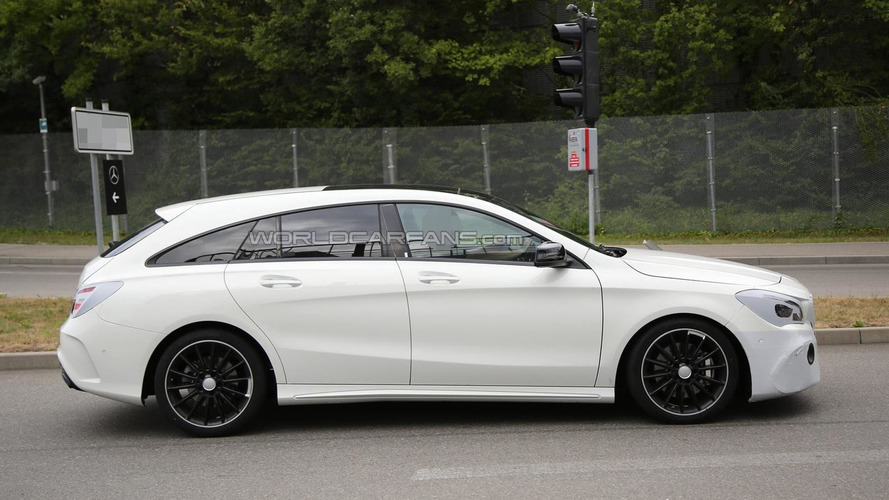 A lightly facelifted Mercedes-Benz CLA Shooting Brake has been caught on camera testing ahead of an early 2016 launch.

A lightly facelifted Mercedes-Benz CLA Shooting Brake has been caught on camera testing ahead of an early 2016 launch.

For current CLA SB owners it has to be pretty frustrating to see that Mercedes-Benz is already working on a facelift, even though the model came out less than a year ago. Judging by the small amount of disguise applied on this white prototype, the cosmetic tweaks will be kept down to a minimum and will obviously mirror those applied recently on the A-Class hatchback.

The camo on the headlights hides new graphics and also the switch from bi-xenon to LED technology while the front bumper is also going through a minor nip & tuck. There's nothing going on with the side profile as it will be carried over from the current model without any changes. The back of the car has some light grey tape on the taillights which indicates some changes to the graphics, but nothing of great significance.

We don't have pics with the interior cabin in this set, but it's safe to assume the refreshed CLA Shooting Brake will get an updated 8-inch infotainment system with support for both Android Auto and Apple CarPlay, along with a slightly different instrument cluster and new galvanized switches.

The top-of-the range CLA 45 AMG Shooting Brake has already received the A 45 AMG's power bump from 360 PS & 450 Nm to 381 PS & 475 Nm as well as the updated AMG SPEEDSHIFT DCT 7-speed gearbox with shorter ratios in third to seventh gears and the reduced shift times.

Chances are the mildly updated CLA Shooting Brake will be out early next year, thus making it one of the fastest facelifts ever.