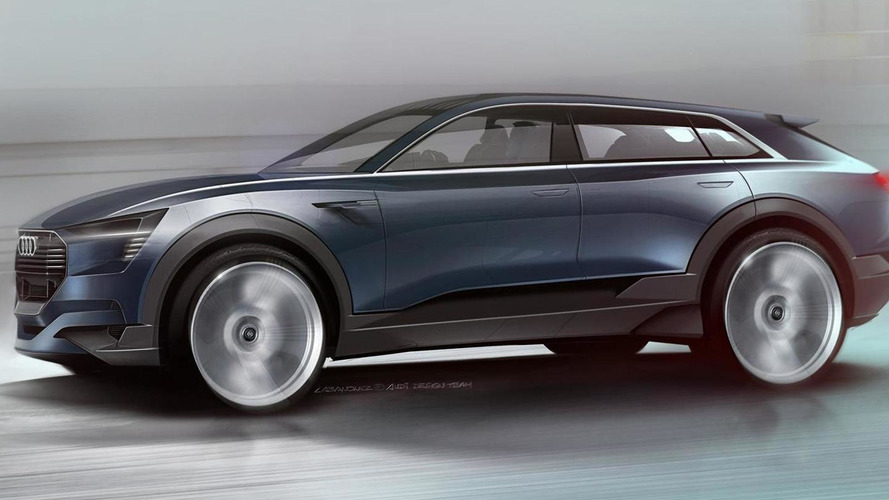 The concept will provide an early look at the first ever Q6 crossover coupe which will be available initially exclusively with an electric powertrain. In terms of design, the sporty look of the sloped roofline is combined with the rugged appearance of the wheel arches and side skirts which employ plastic body cladding. Up front it comes with a pair of futuristic headlights featuring matrix laser OLED technology which is billed as being superior to the current matrix LED setup.

Audi mentions the body has been aerodynamically optimized and as a result the drag coefficient stands at just 0.25 which they say it represent a best-in-segment figure. The concept is based on the second generation MLB platform and in terms of size it's slotted between the Q5 and Q7 which doesn't come as a surprise taking into account the production car will wear the "Q6" moniker.

The "large" lithium-ion battery has been installed between the front and rear axles, below the passenger area, and this has enabled a lower center of gravity and also a more balanced weight distribution. We already know the battery pack is co-developed with South Korean suppliers LG Chem and Samsung SDI and will enable the production car to travel for more than 500 km (310 miles) before running out of juice.

Power comes from a trio of electric motors, one of them mounted on the front axle while the others sit at the back. This system is derived from the R8 e-tron production version and as the “e-quattro” name suggests, it will provide the concept with an all-electric full-time AWD system.

Stepping inside the "spacious interior", it has enough room for four people and comes packed with OLED screens, including two in the back for the rear passengers. Audi has elaborated a driver-oriented cockpit with virtually no physical buttons and knobs as these have been replaced by the touch-operated displays.

The e-tron quattro concept is set to make its public debut in less than a month at the Frankfurt Motor Show, but a full online reveal is expected by the end of August or early September. As for the production version, Audi says the Q6 will be launched sometime in 2018.