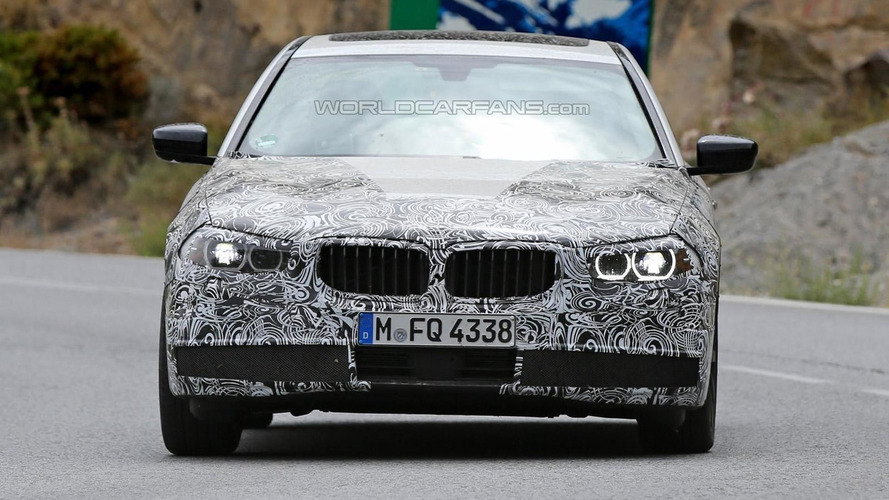 A fully camouflaged BMW 5-Series plug-in hybrid has been caught on camera wearing the production body and lighting clusters.

A fully camouflaged BMW 5-Series plug-in hybrid has been caught on camera wearing the production body and lighting clusters.

Just like the new 7-Series took the evolutionary design route, the mid-size 5 will also stick with the familiar look but with a few refinements here and there worthy of the premium badge. This particular prototype was hiding its production body, but nevertheless it's easy to notice the overall shape and dimensions of the car have remained roughly the same even though underneath the skin is a new car.

It will utilize the same CLAR platform as its bigger brother and this should bring an estimated 100 kg (220 lbs) weight loss as a result of a lightweight multi-material construction. The car featured in the attached gallery was carrying the production-ready full LED headlights and taillights which don't stray away that much from the current 5-Series, but they do appear to look sharper.

The "hybrid test vehicle" lettering and second fuel cap on the front fender clearly shows we are dealing with an alternatively-powered 5-Series and most likely it has the same hardware setup as the X5 xDrive40i. In other words, it mixes up a 2.0-liter four-cylinder turbo with an electric motor, an eight-speed Steptronic gearbox and a 9 kWh lithium-ion battery. This is enough for a combined output of 313 PS (230 kW) and 450 Nm (332 lb-ft) which corroborated with a weight loss should provide some solid performances and great fuel efficiency.

We don't have photos of the interior cabin in this set, but in a previous batch a prototype showed that some of the bits and pieces will be taken from the more expensive 7-Series, including the digital instrument cluster. Also from its bigger brother, the new 5 will source most of the engines and there's obviously going to be a new M5 with an evolution of today's twin-turbo V8 4.4-liter sending power to the rear wheels or to an optional AWD system.

The overhauled BMW 5-Series will likely be unveiled at the beginning of 2017.