BMW has released a first promotional video for the 3.0 CSL Hommage R concept revealed a few days ago at Pebble Beach.

BMW has released a first promotional video for the 3.0 CSL Hommage R concept revealed a few days ago at Pebble Beach. 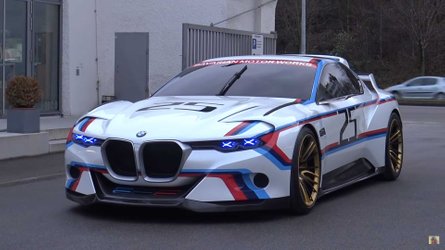 Elaborated as a tribute to the original 3.0 CSL racecar from 1975, the concept is also a race-spec interpretation of the 3.0 CSL Hommage concept from a few months ago and is now perhaps more desirable thanks to the Brilliant White paint combined with the iconic M racing stripes. BMW says the concept represents "the perfect fusion of driver and machine" and also serves as a celebration for 40 years of BMW North America.

The concept comes with a special helmet for the driver which projects relevant information directly on the visor, thus taking the concept of a head-up display further. Inside the cabin is a pair of carbon fiber seats and a wood-like trim for the dashboard which represents a connection to the original 3.0 CSL. Interestingly, the instrument panel actually projects images such as the track's layout and braking points which are obviously of great aid for the driver.

It all sounds very impressive, but the bad news is BMW only built this as a one-off concept as there aren't any plans for a production version.