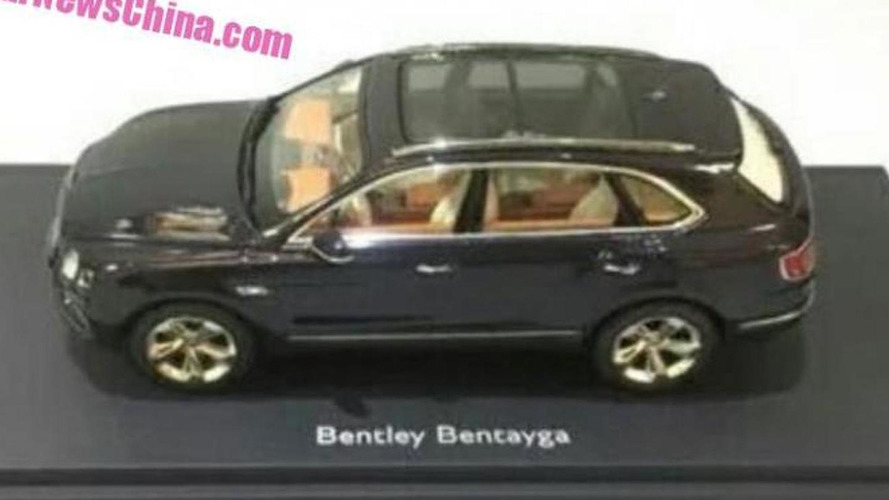 Several low-res images showing what appears to be an official Bentley Bentayga diecast model have hit the web.

Several low-res images showing what appears to be an official Bentley Bentayga diecast model have hit the web.

We can't vouch for the authenticity of this 1:18 scale model from China, but it does seem to be an official Bentley-branded product and shows a great evolution in terms of design compared to the oddball EXP 9 F concept which previewed the production model that will debut at next month's Frankfurt Motor Show.

It keeps the familiar Bentley cues but adapted for the company's first ever high-riding model which will feature the traditional double headlights while the taillights resemble those of the Flying Spur. The extensive chrome detailing probably won't be to everyone's liking as even the roof rails have received this shiny look while the wheels seem to be blinged out as well.

We also notice a huge panoramic glass sunroof, a subtle roof-mounted rear spoiler along with a silver/gray mesh grille pattern at the front and some sort of ornament (or small air vents) on the front fenders. Photos of the cabin have not been provided, but it's easy to see the individual rear seats for ultimate comfort while the rest of the interior has been previewed already in an official teaser.

Based on the second generation Audi Q7, the Bentayga will use a brand new twin-turbo W12 6.0-liter engine with 608 PS (447 kW) and 900 Nm (663 lb-ft) of torque. Other engines are on the agenda, including a twin-turbo V8 and quite possibly a turbodiesel unit which would represent a novelty for the brand. The conventional-powered model will go on sale next year and is going to be followed by an already confirmed plug-in hybrid derivative in 2017.

Since the Bentayga will debut at IAA next month, chances are Bentley will make an online reveal in the weeks to come.