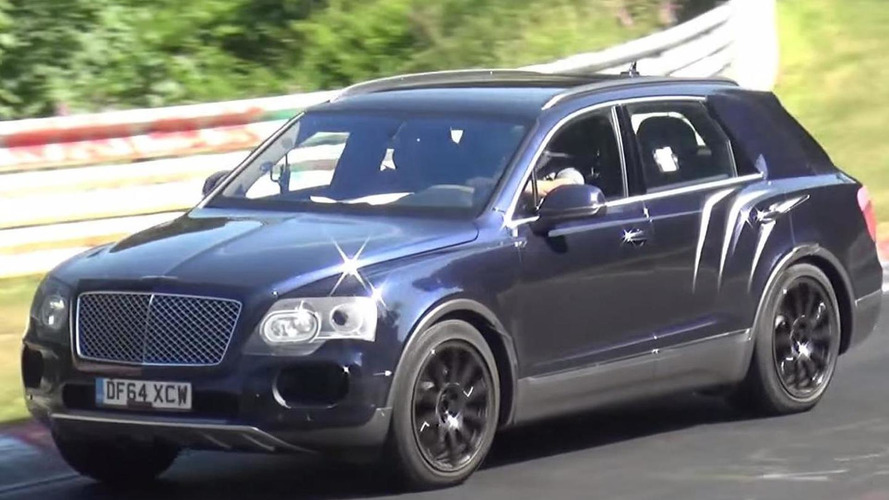 The latest spy video with the Bentley Bentayga shows a prototype being pushed hard on the Nürburgring.

The latest spy video with the Bentley Bentayga shows a prototype being pushed hard on the Nürburgring.

Seeing such a large and heavy SUV going all-out around the 'Ring takes time getting used to, but Bentley wants the Bentayga to be the fastest and most powerful model in its segment so they treat prototypes as if these were proper sports car. It's not going to be that no matter how hard they try, as the sheer size of this thing and a weight of around 2,000 kg (4,409 lbs) will certainly take their toll on the vehicle's performances.

Bentley has announced the newly developed TSI twin-turbo W12 6.0-liter engine will be available with 608 PS (447 kW) and a whopping 900 Nm (663 lb-ft) of torque. Aside from being the company's first crossover ever, the Bentayga will likely be Crewe's first diesel-powered model ever. The familiar twin-turbo V8 4.0-liter will probably be offered as well and we already know in 2017 there's going to be a more frugal plug-in hybrid derivative.

The Bentayga is expected to show its production face at the Frankfurt Motor Show and hopefully it won’t look anything like the EXP 9 F concept.