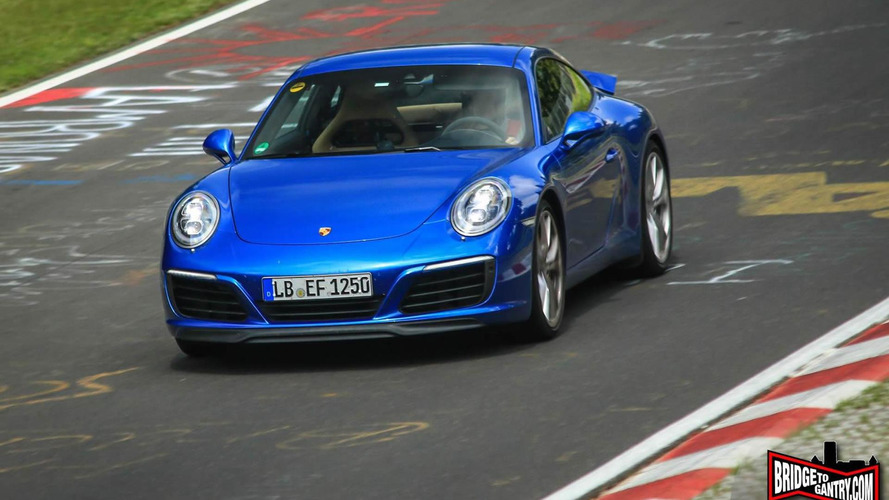 An undisguised pre-production prototype of the facelifted Porsche 911 has been caught on camera at the Nürburgring.

An undisguised pre-production prototype of the facelifted Porsche 911 has been caught on camera at the Nürburgring.

It was only yesterday when we posted a low-res photo of a 911 (991.2) on the streets of Prague and now we have much better shots of the model which seems to be a Carrera version. After hearing it how it sounds, Nürburgring Bridge To Gantry believes the car likely had a turbocharged engine which shouldn't come as a surprise as the facelifted 911 range is expected to go all-turbo except for the GT3 models.

The Carrera version will reportedly make use of a six-cylinder 2.7-liter engine outputting 407 PS (300 kW) whereas the Carrera S is believed to receive a larger 3.4-liter turbo-six, but it's output is not known at this moment.

As for the styling changes, there are revised graphics for the lighting units, new DRLs, slightly different bumpers, new exhaust system with the tips closer to each other, along with vertical slats for the engine cover. On the inside, previous spy shots have shown the 991.2 model will bring the 918 Spyder's steering wheel, a bigger display for the infotainment system and a toggle switch mounted on the right-hand side.

Since Porsche doesn't even bother camouflaging the prototypes anymore, an official online reveal should come very soon. A public debut is set for mid-September at the Frankfurt Motor Show and sales will likely begin shortly thereafter.