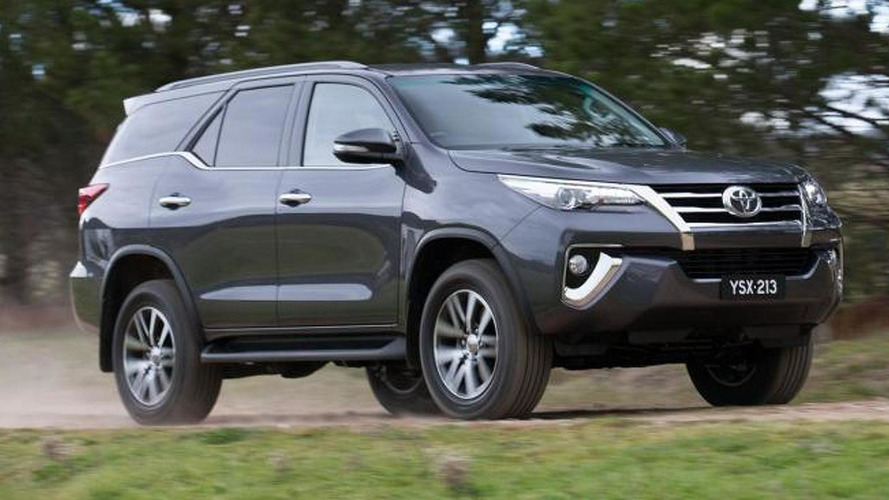 Toyota Australia has taken the wraps off the all-new Fortuner SUV based on the latest HiLux pickup truck.

Toyota Australia has taken the wraps off the all-new Fortuner SUV based on the latest HiLux pickup truck.

The seven-seat off-roader has reached a new generation which brings a more upscale design in the same vein as the HiLux and with some high-end features on the range-topping model such as bi-LED headlights, LED daytime running lights and LED taillights. It's 4795mm long, 1855mm wide and 1835mm tall while the wheelbase spans at 2745mm.

Toyota will offer the AU-spec model with a new direct-injection, four-cylinder 2.8-liter turbodiesel engine which generates 177 PS (130 kW) at 3,400 rpm. When mated to the brand new six-speed manual gearbox, the engine delivers a maximum torque of 420 Nm from 1,600 rpm, but if you upgrade to the new six-speed auto the torque rises to 450 Nm and is available from a low 1,400 rpm. As for braked towing capacity, the manual version is rated at 3,000 kg whereas the automatic model can tow up to 2,800 kg.

In terms of suspension, up front there’s a double wishbone setup while in the back it has a 5-link coil-spring setup unlike the HiLux which adopts a leaf-spring configuration. Four-wheel drive (with high & low range) will be standard across the range and so will be the trailer sway control system as well as a rear differential lock, reversing camera, hill-start assist and seven airbags.

When the extra traction of the 4WD system is not required, the driver can use the on-board dial to enable the Fortuner run with a more economical 2WD setup. More expensive versions will be generously equipped with keyless smart entry & start, roof rails and a very useful downhill assist control system.

Toyota Australia says the new Fortuner will reach local dealerships by the end of October.