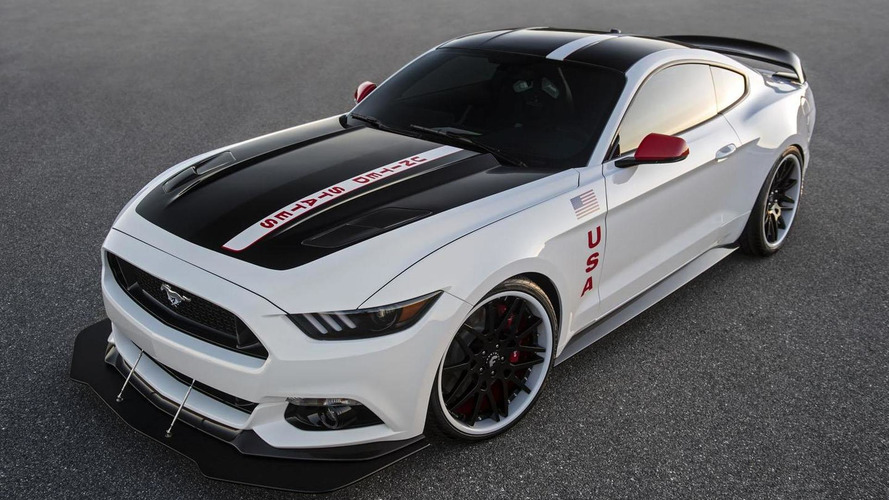 Ford has released new details about the Mustang Apollo Edition that will be auctioned off at EAA AirVenture Oshkosh 2015 on July 23rd.

Ford has released new details about the Mustang Apollo Edition.

Set to be auctioned off at EAA AirVenture Oshkosh 2015 on July 23rd, the one-off model is based on the Mustang GT and features a black and white exterior that draws inspiration from NASA’s Apollo program.  The car also has a carbon fiber front splitter, a rear diffuser and LED underbody lights that "symbolize atmospheric re-entry."  Other highlights include a sport-tuned suspension and 21-inch Forgiato wheels which are backed up by six-piston Brembo brakes.

The unique styling continues in the cabin as there's black leather sport seats with white accents and red contrast stitching.  The rear seats have also been removed by replaced by a leather cover that features patches from the various Apollo missions.  The one-off model also has special floor mats, a modified instrument cluster and unique sill plates - among other things.

Under the hood, the 5.0-liter V8 engine has been equipped with a Ford Performance supercharger and a sports exhaust system.  Thanks to these modifications, the engine develops 627 bhp (467 kW) and 540 lb-ft (731 Nm) of torque.

All proceeds from the auction will benefit EAA youth education programs including the Young Eagles which has provided free introductory flights to more than 1.9 million young people since 1992.