BMW M2 spied going all out on the Nurburgring [video] 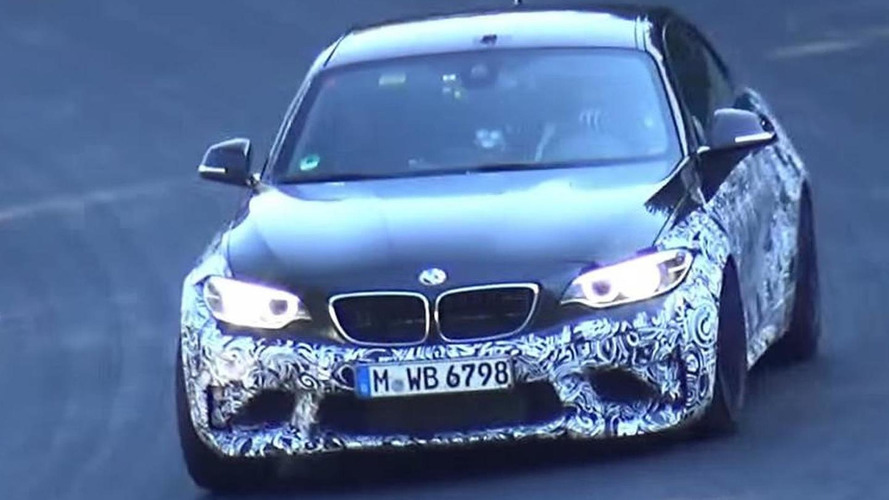 A prototype of the BMW M2 Coupe has been caught on camera stretching hard on the Nürburgring where it was performing the final testing procedures.

A prototype of the BMW M2 Coupe has been caught on camera stretching hard on the Nürburgring where it was performing the final testing procedures.

Codenamed F87, the M2 is just about ready to show its production face as BMW recently said it will be revealed "soon" and according to the latest gossip it will pack a mighty 370 PS punch from a six-cylinder, 3.0-liter turbocharged gasoline engine generating a maximum torque of 465 Nm (342 lb-ft) and 500 Nm (368 lb-ft) with overboost for a short amount of time. It's not known at this stage whether the engine will work with a six-speed manual and/or a seven-speed DCT.

Details regarding the car's performances are not available at this point, but taking into account the rear-wheel drive M235i with DCT needs 4.8 seconds to run the 0-62 mph (0-100 km/h), chances are the M2 will need only 4.4 seconds or so. Top speed should be electronically-limited to 155 mph (250 km/h), but a possible M Driver's Package will bump the maximum velocity to 170 mph (274 km/h).

BMW will apparently offer (at least at launch) the M2 with only four colors: Mineral Grey metallic, Long Beach Blue metallic, Black Sapphire metallic and Alpine White. Taking into account the M235i costs €44,900 (manual, RWD) in Germany, expect the M2 to easily hit the €50,000 barrier once it will go on sale towards the end of the year or early 2016 as production is expected to begin in November.

PS: Ignore the "F86" codename in the YouTube clip, because it's wrong. The F86 refers to the second generation X6 M.

Gallery: BMW M2 spied going all out on the Nurburgring [video]