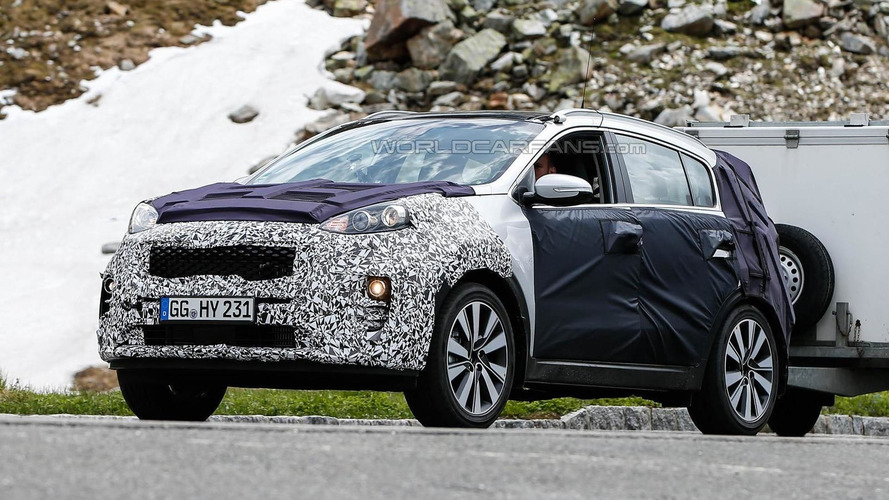 A partially camouflaged prototype of the fourth generation Kia Sportage has been caught on camera undergoing final testing.

A partially camouflaged prototype of the fourth generation Kia Sportage has been caught on camera undergoing final testing in the Swiss Alps.

Hyundai introduced its next-gen Tucson back in March at the Geneva Motor Show and we are just about ready to see sister model Kia Sportage receive a new generation. The latest gossip points to a September reveal, quite possibly at the Frankfurt Motor Show.

Even though it was still carrying a significant amount of camouflage, it's easy to notice Kia's designers are sticking with just about the same overall shape of the compact crossover, but with sharper lighting clusters, different bumpers and a fresh interpretation of the tiger nose front grille.

Although not visible on this prototype, we know higher-spec models are getting those cool-looking LED ice cube daytime running lights. Codenamed QL, the new Sportage will come with a revised interior cabin similar to what the 2016 Sorento boasts, so expect a more upscale fit & finish along with a more generous array of equipment.

In terms of engines, these will likely be carried over from the 2015 Tucson which in Europe can be had with a 132 PS 1.6-liter GDi normally-aspirated unit, a 116 PS 1.7-liter CRDi diesel and a 136 PS & 185 PS 2.0-liter CRDi. Gearbox choices will include a standard six-speed manual, a six-speed automatic and the newly introduced seven-speed dual-clutch transmission.

Taking into account the new Sportage is bound to show up at IAA in mid-September, look for an online debut sometime in August or even earlier.