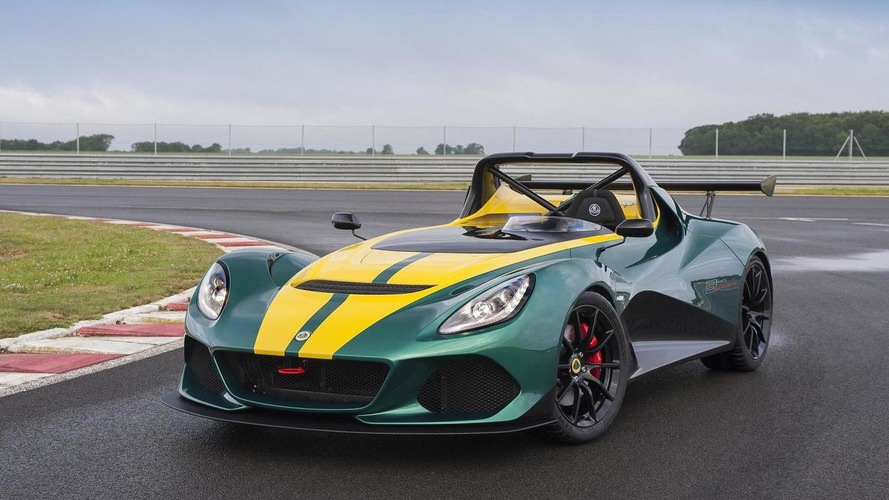 After playing the teasing game, Lotus has introduced the 3-Eleven at the 2015 Goodwood Festival of Speed.

After playing the teasing game, Lotus has introduced the 3-Eleven at the 2015 Goodwood Festival of Speed.

Described as being an "uncompromised manifestation of the Lotus spirit", the new 3-Eleven will be offered in both road-going and track versions and will be the company's most expensive and quickest production car ever made. The race-spec model will tip the scales at less than 900 kg (1,984 lbs) and will be able to run the 0-60 mph (0-96 km/h) sprint in less than three seconds before topping out at 174 mph (280 km/h) whereas the road-legal model will hit 180 mph (290 km/h).

Its heart and soul is the familiar Toyota-derived supercharged V6 3.5-liter engine sourced from the Evora 400, but further tuned to deliver 450 bhp (336 kW) at 7,000 rpm and 450 Nm (332 lb-ft) from 3,500 rpm. All that power is channeled to the wheels through a close-ratio six-speed manual gearbox and a Torsen limited-slip differential in the road version while the track-only model is equipped with a six-speed sequential transmission.

Both cars share a bonded and riveted aluminum monocoque hub chassis with a roll cage for the road model and additional bars for the FIA-compliant race-spec variant. The body is made from a new type of composite material applied for the first time on a production car and they say it's 40% lighter than fiberglass. It sits on lightweight 18-inch front alloys shod in 225/40 R18 tires and 19-inch rear wheels with 275/35 R19 rubbers while the stopping power comes from AP Racing four-pot brake calipers along with a Lotus-tuned Bosch anti-lock brakes.

Only 311 units in total will be produced starting February next year, with prices kicking off at £82,000 for the road-going model and £115,200 for the race-spec version.