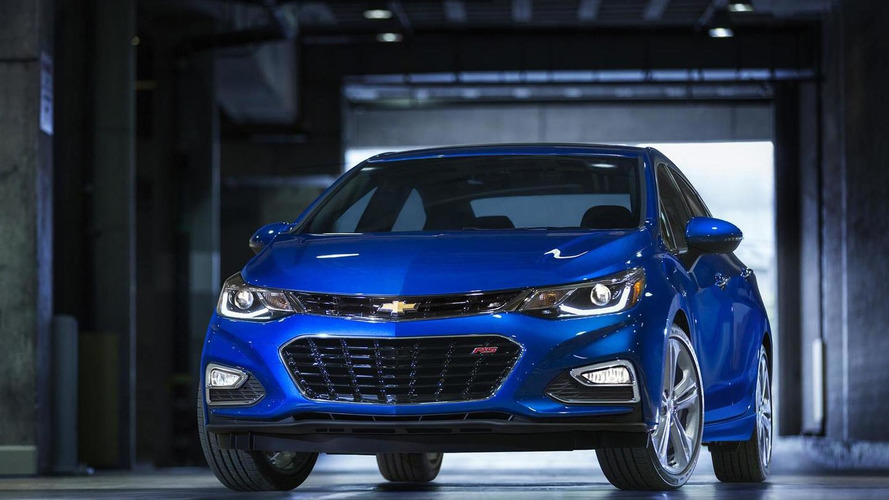 After a lengthy teaser campaign (including a ludicrous emoji episode), Chevrolet has staged the world premiere of the second generation Cruze.

After a lengthy teaser campaign (including a ludicrous emoji episode), Chevrolet has staged the world premiere of the second generation Cruze.

Looking substantially more dynamic than its predecessor, the overhauled Cruze adopts a sleeker body which has been lowered by almost an inch (25 mm) while the overall length has increased by 2.7 inches (68 mm). A part of the added length can be found in the wheelbase which has been stretched by almost an inch to 106.3 inches (2700 mm) which Chevrolet says represents a best-in-segment figure. Despite growing in size, the 2016 Cruze has shaved off a substantial 250 lbs (113 kg) and benefits from a 27% stiffer body which has a 0.29 drag coefficient after being fine-tuned in the wind tunnel.

As far as the interior cabin is concerned, it offers two inches more of rear knee room and extra rear legroom thanks to the longer wheelbase. The driver gets a 4.2-inch high-resolution center display mounted in the gauge cluster to access all the relevant data while the infotainment system packs a standard 7-inch display or an optional 8-inch system which can work with Android Auto and CarPlay.

The 2016 Chevrolet Cruze will be sold as standard with 10 airbags, disc brakes for all wheels and a rearview camera while at an additional cost it will be optionally available with safety and assistance technologies like Lane Keep Assist, Rear Cross-Traffic Alert, Side Blind Zone Alert and Forward Collision Alert.

Produced at the Lordstown, Ohio assembly plant in United States, the second-gen Cruze will be sold globally in more than 40 countries and will go on sale in U.S. early next year. In 2017, a diesel engine will be added while a Cruze hatchback is also being planned.