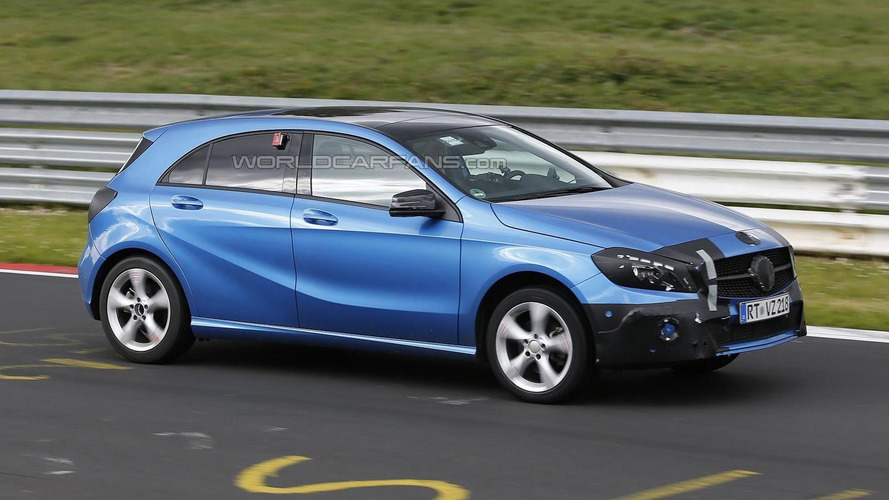 A barely camouflaged prototype of the facelift Mercedes-Benz A-Class has been captured on camera performing final testing rounds on the Nürburgring.

A barely camouflaged prototype of the facelifted Mercedes-Benz A-Class has been captured on camera performing final testing rounds on the Nürburgring.

Although the prototype was carrying some light disguise, we already know what the mid-cycle A-Class refresh will bring as a camo-free prototype was spotted last month showing some subtle revisions to the headlight graphics and a slightly modified front bumper. It also had fresh alloy wheels and a new green body color while from a previous report we found out its getting optional LED headlights replacing the current bi-xenon arrangement.

We also know the range-topping A45 AMG will receive an additional (estimated) 20 PS so the turbocharged 4-cylinder 2.0-liter engine will develop as much as 380 PS (280 kW), thus taking back the hot hatch crown from Audi who stole the show with the 367 PS RS3 Sportback late last year.

Details about other changes in the engine department are not available at this point, but we woudn't be surprised if Mercedes-Benz will launch a warm AMG Sport version to slot between the standard version and the flagship. We base this assumption on the fact there's a massive power gap between the 211 PS A250 Sport and the 360 PS (soon to be 380 PS) A45 AMG.

Mercedes-Benz will reportedly open the order books next month so an official reveal should occur in the coming weeks, with deliveries to kick off shortly after the facelifted A-Class will be shown in Frankfurt at IAA in mid-September.