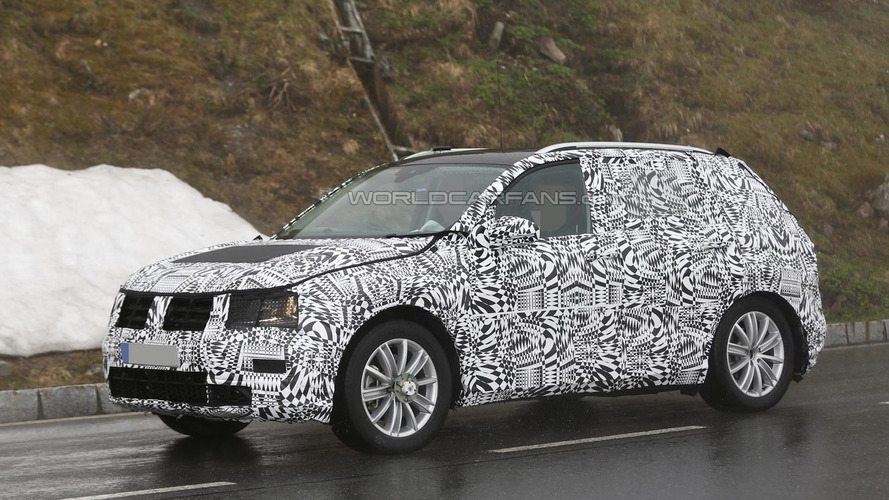 A couple of fully camouflaged prototypes of the next-gen Volkswagen Tiguan have been caught on camera testing in the Alps with the production body.

A couple of fully camouflaged prototypes of the next-gen Volkswagen Tiguan have been caught on camera testing in the Alps with the production body.

The heavy disguise on these LHD and RHD test prototypes makes the new Tiguan look like a smaller Touareg, but Volkswagen Australia managing director John White has promised it will look "phenomenal" after being "totally redesigned." A previous report stated the new Tiguan will be stretched by 2.2 inches (5.5 cm) and will benefit from a shorter front overhang.

Volkswagen has already confirmed a roomier derivative with an extended wheelbase hosting three rows capable of seating up to seven people will enter production late 2016 at the factory in Puebla, Mexico. It is believed this version will be 7.9 inches (20 cm) longer than the standard model and Volkswagen has previously said it will be sold in North and South America and in other areas around the world, excluding China and Europe.

The standard Tiguan is expected to be unveiled in September this year at the Frankfurt Motor Show, with European sales to commence shortly thereafter. Aside from the standard and long wheelbase versions, the rumor mill indicates a possible third body style taking the shape of a stylish five-door with a more coupe profile.