Mercedes-AMG GLC Spied Winter Testing, Might Be Called The 63e

We’re closing in on it being two years since we first saw the next-generation Mercedes GLC, with early speculation hinting it’d debut for the 2022 model year. It’s still not here and likely won’t debut until later this year, but a new batch of spy shots did capture the crossover cold-weather testing once again, but this time it’s the AMG 63 trim.

The AMG GLC 63 stands out from the standard GLC test vehicle with its wider stance, Panamericana grille, large wheels, and beefy brakes, even if the finder details are hiding under a layer of camouflage. The real tell is at the rear, where the quad exhaust pipes sit. The GLC looks a tad larger than the model it’s replacing.

Inside, the next-gen GLC will get the latest Mercedes interior, which will include more screens and tech. The GLC shares a lot with the C-Class, including the interior with a large infotainment screen positioned low on the dashboard. Previous spy shots revealed much of it, though Mercedes did hide the dash, doors, and center console.

The new GLC will also get a big change under the hood where a 2.0-liter plug-in hybrid powertrain will propel the performance-focused AMG model. Mercedes will use its M139 turbocharged 2.0-liter and an electric motor that could produce around 634 horsepower (480 kilowatts). That’d be a sizable increase over the 469-hp (349-kW), current-generation GLC that has a twin-turbo V8 between the fenders. 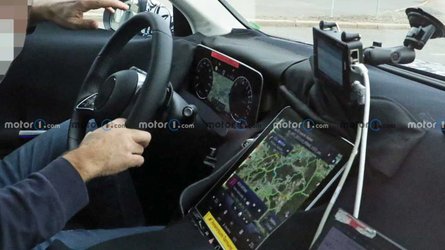 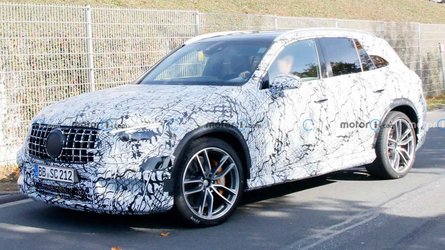 Mercedes might also alter the model’s name alongside the new powertrain. Our spy photographers heard a rumor that the company is considering naming all hybrid AMG 63 models 63e. That’d mean we would get a GLC 63e, with the top trim model being the GLC 63 S E Performance, which is a mouthful.

The next-generation Mercedes GLC is set to debut sometime this year and possibly go on sale in some markets before 2023 begins. The AMG variants could debut late in the year, but we don’t expect them to launch alongside the non-AMG next-gen GLC model, and they could arrive in 2023.