With some of the camo removed, the big luxury SUV looks production-ready.

Cadillac has done a very good job of keeping its muscular Escalade-V high-performance SUV a secret. We first caught a pair of prototypes on the road in May 2021, followed by a video in August. Now, the crew at Muscle Cars & Trucks captured the best look we've seen thus far of the supercharged beast, but that's not all. The end of the above video includes a full-throttle flyby that's pure American V8 bliss.

Before we get to the end, let's talk about the video's beginning and middle. We're treated to several good looks that show camouflage wrap removed from the doors and roof. The lower rocker panels seem a bit more prominent compared to a standard Escalade, but it could be the camera angle. Such upgrades would be a good match for tweaked front and rear fascias, which are still hiding under heavy covers. We can see a modest lip spoiler in the front, and in previous spy shots, it looked as though the grille dipped a bit lower. The rear fascia now makes room for quad exhaust tips, giving the luxury SUV a muscular presence.

Those pipes should be connected to a supercharged 6.2-liter V8. Rumors say it's the same LT4 engine used in the Chevrolet Camaro and the Escalade's stablemate, the CT5-V Blackwing. Total engine output is unknown, but for comparison, the mill churns out 668 horsepower (498 kilowatts) in the Caddy sedan and 650 hp (485 kW) in the Chevy. Considering a fully-equipped Escalade can weigh nearly three tons, the beefy SUV can use every ounce of power Cadillac is willing to throw at it. Judging by how quickly it accelerates at the end of the video, we'd say it's making at least the Camaro's 650 ponies. 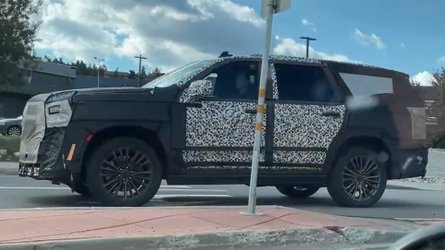 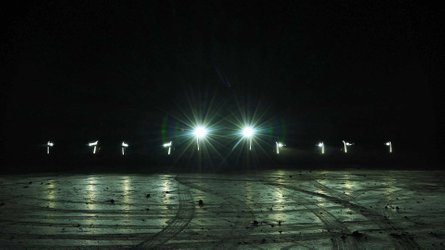 Of course, all information at this point is pure rumor. Cadillac isn't ready to talk about the Escalade-V, including whether or not it will also wear a Blackwing badge. However, once camouflage starts coming off test vehicles, it's usually a good sign that a reveal isn't far off. We're betting that will happen in the first half of 2022, debuting as a 2023 model.