Who doesn't love the Ferrari F40?

Driving a Ferrari F40 is special even if you’re a Formula One World Champion. Nico Rosberg former F1 Driver and 2016 Formula One World Champion has a very unique retirement project. In his free time, he makes YouTube videos for his automotive vlog channel where he shares a unique part of the car world with his viewers. To celebrate his achievement of 1 million subscribers, Rosberg borrowed a very special car from his neighbor.

To contact his neighbor and ask to borrow this highly collectible Ferrari F40, Rosberg used some sticky notes that he placed on the F40’s window. As a simple explanation sharing his identity, racing credentials, and phone number were all it took for this very special opportunity to unfold.

It’s very clear from the onset that Rosberg understands just how special the Ferrari F40 is. Even F1 drivers have bucket lists, and driving a Ferrari F40 is just as exciting to him as it is to any fan of supercars. The only difference is Rosberg’s driving skill which is most likely much better than any of us, and even Lewis Hamilton in 2016. That being said, the driving segment of this video is slightly nerve-racking. 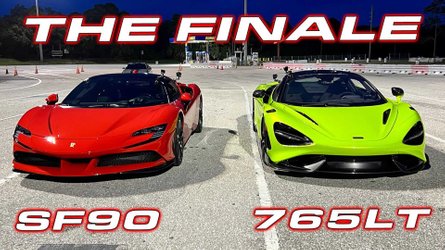 In the tight canyon roads on the Mediterranean coast, the Ferrari F40 is pure art in motion. I cannot think of a more spectacular place to enjoy one of the greatest cars ever built. With clear blue sea a backdrop and sheer rocky cliffs projecting the exhaust note of this twin-turbo supercar, it's pure poetry in motion. In the tight streets of Monaco, however, things are a little scary, to say the least. Thankfully Rosberg is a veteran of dealing with tough traffic in Monaco so the F40 makes it home safely at the end of the video.

What’s your dream car to drive around Monaco? If you had a Ferrari F40 would you like Nico Rosberg to drive it for a YouTube video?