It gets a body kit, new wheels, and some interior tweaks.

There are more aftermarket tuning options and accessories than ever, though not all products are equal. Some are of inferior quality while others fail to meet safety standards, and those could become dangerous on a two-ton vehicle cruising down the highway. To raise awareness about the potential for unsafe aftermarket parts, Techart has created a special Porsche 911 Targa 4 that’s wrapped in a slick police livery.

The car is for the 2022 Tune it! Safe! campaign that takes action against illegal and unsafe modifications. The initiative was launched in 2005 under the Federal Ministry of Transport, with support from the German Association of Automotive Tuners, Hankook tires, and other partners. The goal is to promote safe and responsible tuning, focusing on educational work for consumers.

The 911 wears the tunnel-tested Techart Aerokit, which includes a front spoiler, side skirts, aero wings, a rear diffuser, and a rear spoiler. Techart pairs the new body bits with its Sport Springs that lower the car 40 millimeters (1.57 inches), though it is the police livery that really transforms the car’s appearance. The police car also receives Techart’s Formula V multi-spoke wheels. 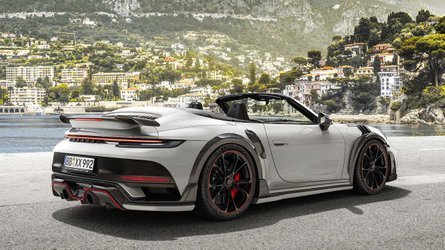 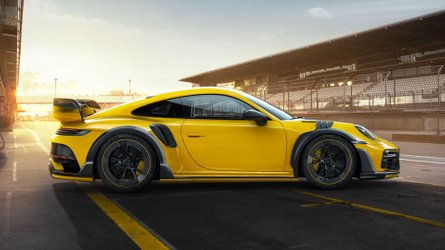 Inside, the tuner adds its Sports steering wheel, which has a bright-yellow 12-o’clock position indicator. There’s a perforated checkered flag design used elsewhere on the wheel and throughout the rest of the interior – it’s on the armrests, hand rests, center console, and seat backs.

Thankfully, you won’t be seeing Techart’s police Porsche in your rearview mirror when you’re cruising the Nurburgring next time. The car has an educational purpose that will see it on display at various events over the next year as the initiative promotes safe and responsible tuning. Techart will display the Tune It! Safe! Porsche 911 Targa 4 at the Essen Motor Show that starts November 26 and runs through December 5.