The 14-year-old has a bright racing future ahead of her.

Ken Block and Ford might have parted ways earlier this year, though it looks like he kept the Hoonicorn. A new Hoonigan YouTube channel has the modified Mustang back to race, though it's facing something a bit different this time around – a Pro Stock Chevy Corvette drag racer piloted by NHRA driver Alex Laughlin. The Corvette has 4,000 horsepower (2,982 kilowatts) and a parachute, but will it be enough to keep the Mustang in the rearview mirror?

The Hoonicorn, driven by Block's 14-year-old daughter Lia, is way down on power, by comparison, making a measly 1,400 horsepower (1,043 kW) from its twin-turbocharged Ford-sourced V8. The engine pairs to a six-speed paddle-shift gearbox, and the car has all-wheel drive. The Corvette has a blown Hemi V8 with a three-speed Lenco transmission. It's a tad lighter than the Mustang – 2,800 pounds (1,270 kilograms) to 2,998 lbs (1,359 kg), though it has rear-wheel drive.

The first race saw the Hoonicorn get a massive lead off the starting line, leaving the Corvette in the dust, which it couldn't overcome. The second race is much closer, with the two getting a relatively equal start from the tree, though the Corvette is able to keep its lead through to the finish, crossing the line by about half a car length. The final race goes much like the first, with Lia getting a remarkable start that the Corvette can't compete against. Lia's Hoonicorn crosses the finish line by about three car lengths. 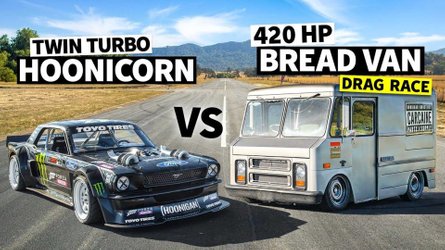 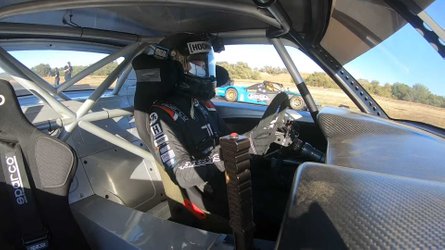 It might seem unfair to pit a 4,000-hp Corvette against the Hoonicorn, though the tarmac isn't prepped for racing. That makes it difficult for the Corvette, which has completed the eight-mile in 3.5 seconds at 212 miles per hour (341 kilometers per hour), to find the necessary traction. The video also shows the difference all-wheel drive can bring to an unfair matchup.