BMW provides a peek at the future.

BMW has had a busy week teasing a trio of future products. Earlier this week, a stylized sketch previewed the BMW M4 GT4 while the brand graced Thanksgiving with a glance at the M3 Touring’s camouflaged derrière. Those are quite exciting, though BMW held out until Friday to tease the Concept XM – an electrified high-performance SUV that should sit at the top of the lineup.

The Concept XM’s Instagram teaser video provides brief glimpses of the large SUV, which shows off the model’s unique lighting signature. BMW illuminates the grille surround, and it also puts accent lights located just above the windshield. The video also gives a glimpse of the SUV’s rear end, which is draped in moody red lighting. The Concept XM appears to have chunky rear fenders, with a stylized LED taillight strip and an angular hatch design.

Details remain elusive about the new model, though we believe this will be the brand’s new flagship model, combining luxury, the latest tech, and electrification into a halo vehicle. However, it won’t be a full EV. In production form, rumors point to BMW pairing a twin-turbo 4.4-liter V8 with an electric motor for a combined output of around 750 horsepower (559 kilowatts). That’s supercar power in an SUV, though we should learn more when the concept debuts early next month in Miami. 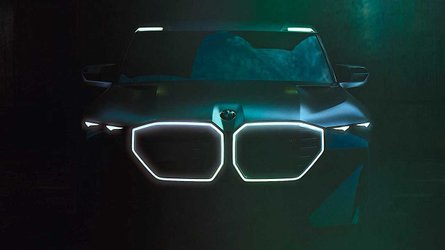 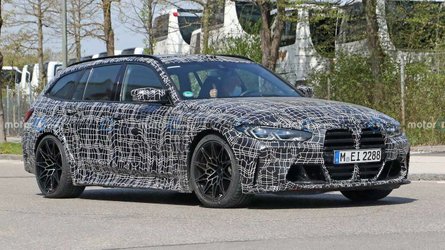 If a high-performance SUV isn’t tickling your fancy, BMW teased two other vehicles this week. Yesterday, the company again showed off the M3 wagon, though the company continues to keep it hidden under a full-body camouflage wrap with bold “Bring It On” branding on the side, which hints at a Nurburgring lap record attempt. It should look a lot like the M3 sedan, except with a longer roof and a redesigned rear end. The powertrains should carry over, too.

The final vehicle BMW previewed is for racers – the M4 GT4. There’s only a sketch of it right now, though the company did announce that it’s beginning “intensive testing” on the new model. It should position itself against the likes of the Porsche 718 GT4 RS Clubsport and others.