David versus Goliath anyone?

The Ford Maverick is a small truck. It slots well below the F-150 in the Blue Oval truck family, and though we've seen a few side-by-side comparisons before, this one in particular really shows the size difference. The Maverick is so small next to the F-150 it's almost cute. But cute doesn't win drag races. Power does.

And the F-150 most decidedly has power. This new TFLtruck video features a PowerBoost Hybrid model in stripped-down XL trim, a curious combination but it doesn't change the 430 horsepower (321 kilowatts) belted out by the truck's electric-enhanced twin-turbocharged V6. It's a range-topping powertrain, whereas the Maverick's 2.5-liter four-cylinder hybrid is entry-level with just 191 hp (142 kW) going to the front wheels alone. It seems the Maverick has little chance in this matchup, but it does hold one advantage over its big brother. It's lighter ... by a full 2,000 pounds.

Before the Maverick races the F-150, it must first defeat a new Bronco packing its own twin-turbocharged V6. To great surprise, the Maverick gets the job done despite the power disadvantage. It turns out the off-roader is also quite heavy, and with a focus on dominating trails, it's just not suited for an on-pavement drag race. The Maverick didn't win by a large amount, but it did win.

Of course it won, and honestly, we're pretty sure it was going to win no matter what. Everyone wants to see the smallest and largest Ford pickups facing off in a drag race, especially with each rig wearing the same shade of blue. The size difference between them is almost comical, and when the race starts, the power difference is just as shocking. The F-150 literally carries an extra ton compared to the Maverick, but having more than double the power easily makes up for that. With accelerators planted, the F-150 walks away for a very easy win.

These Fictional Mavericks Could Be Faster: 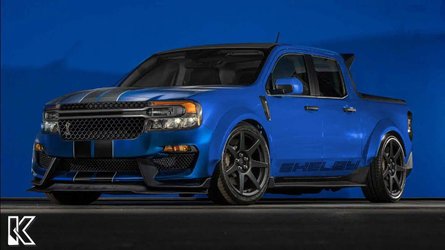 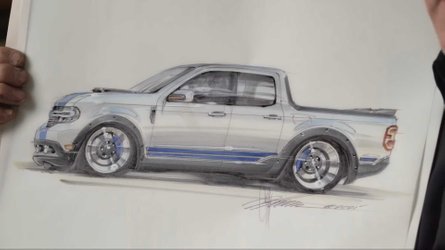 A second, um, race was staged with the trucks using only electric power, though neither truck has a dedicated electric-only mode. As such, the term race doesn't really apply here, since neither driver could punch the throttle with any measure of force lest they engage the gasoline engine. The result is perhaps the slowest drag race we've seen, which was won by the Maverick. Though we aren't sure if that's really a victory in this context.

Both trucks will soon be joined by a new Ford Ranger, which recently debuted for global markets and will go on sale in 2022.