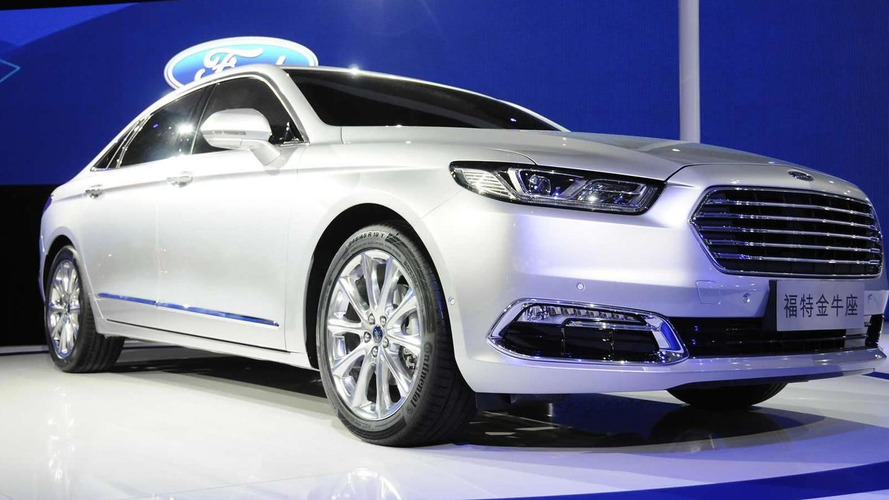 Ford has staged the world premiere of the 2016 Taurus (CN-spec) at Auto Shanghai 2015 in China.

Ford has staged the world premiere of the 2016 Taurus (CN-spec) at Auto Shanghai 2015 in China.

There's not much to say in terms of design as the new Taurus for the Chinese market looks like a bigger Mondeo/Fusion with taillights inspired by those of the 2015MY US-spec Taurus. The full-size model is billed as a "premium business sedan" with an overall length of five meters and a generous 2.95 meter wheelbase granting "abundant" rear legroom.

It's the first CN-spec Ford to have power-reclining rear seats with optional adjustable lumbar support as well as a massage function while the rear bench has a 40/20/40 split layout so it can be folded whenever there’s need for more space to carry voluminous cargo.

In terms of power, the 2016 Ford Taurus for China gets a twin-turbo EcoBoost 2.7-liter engine but the Blue Oval company isn't saying anything about its output. They do mention it's a newly developed high-output "world-class" engine granting power in a "stronger, smarter package" to provide the Taurus with "effortless power".

Ford has announced the 2016 Taurus (CN-spec) is going to be manufactured at the newly established Changan Ford Hangzhou factory which is the result of a $760 million investment. It's actually the sixth factory in China and can assemble up to 250,000 units annually.