The Italian duo was filmed at Ferrari's Fiorano track.

What do the Ferrari 812 Competizione and Fiat Tipo have in common? Aside from being front-engined Italian cars, not much. Heck, they technically don't even have the same parent company what with Ferrari being publicly owned while Fiat is one of Stellantis' 14 brands after the merger between PSA and FCA. In addition, the Prancing Horse has three times more cylinders than the compact wagon, provided the latter doesn't have the base three-cylinder engine.

The Tipo SW might only be an honest-to-God estate that costs a fraction of the Competizione's price, but for a while, the Fiat spent some quality time with Maranello's V12 monster. Speaking of which, the video was shot at Ferrari's Fiorano track near the famous city in northern Italy where the company calls home. The cheap wagon served as a camera car for what is probably an upcoming marketing material.

The fact Ferrari has already officially revealed the car and sold all 1,598 examples – including here those of the 812 Competizione A convertible – doesn't necessarily mean it will ignore the model going forward. After all, the car comes equipped with the most powerful combustion engine ever installed by the fabled marque, with 830 horsepower and 510 pound-feet (692 Newton-meters) of torque from a 6.5-liter V12.

It's a bit funny to see a hardcore Ferrari "stuck" behind a plebeian Fiat, but it was necessary so that the camera crew could immortalize the 812 Competizione in high quality and from the best angles. The eight-minute footage ends with the two cars exiting the Fiorano truck after what must have been a fruitful video recording session. 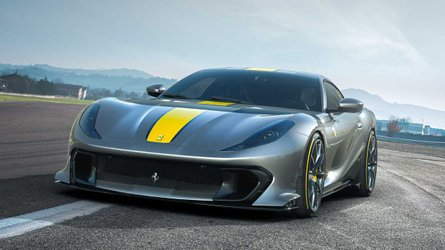 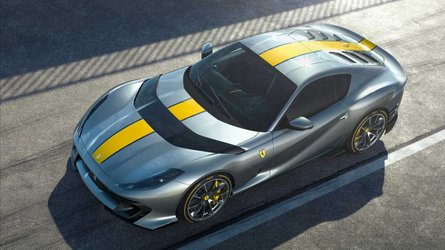 Even though it was unveiled only several months ago, the dynamic coupe and cabrio duo is not the newest Ferrari to see the light of day. That title goes to the BR20, a one-off coupe based on the GTC4Lusso. Later this month, the second model from the Icona series will break cover, supposedly as a LaFerrari-based modern tribute to the 330 P4 Spyder with the 812 Competizione's V12.