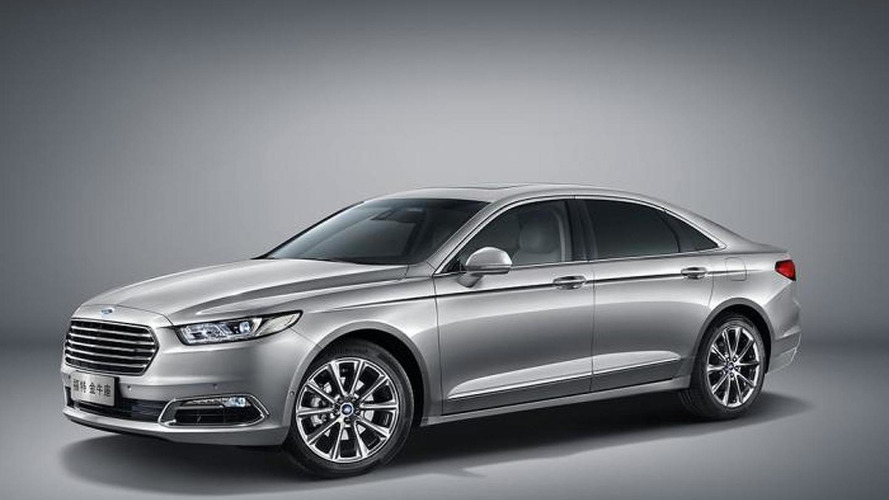 Ford has taken the wraps off the 2016 Taurus at a special event in Shanghai, prior to its premiere during the 2015 Shanghai Motor Show

Ford has taken the wraps off the 2016 Taurus at a special event in Shanghai, prior to its premiere during the 2015 Shanghai Motor Show.

Looking instantly recognizable, the vehicle is being described as a “new premium sedan for discerning Chinese business customers”. The Blue oval brings the Taurus nameplate in the country for the first time with a model “designed especially to meet the needs” of the local market.

In terms of design, the new Taurus shares many of its design cues with the current Mondeo/Fusion, featuring a hexagonal radiator grille, surrounded by sweptback LED headlights. Also notable are the 19-inch 10-spoke wheels and the LED taillights.

The producer says the interior comes with a “smart design” with a full panoramic sunroof, more than 25 “intelligent” storage spaces and generous room for the rear passengers.

Power is provided by a new 2.7-liter EcoBoost V6 engine, but Ford is keeping its characteristics in secret. The marque says it delivers power in a “stronger, smarter package”.

The 2016 Ford Taurus will be produced at the recently opened Changan Ford Hangzhou Plant, representing a 760M USD investment. It is the sixth assembly plant producing Ford vehicles in China and is capable of producing up to 250,000 vehicles a year.