In fact, it's a 92 years-old custom tractor.

We are kind of addicted to watching videos of old cars being washed and detailed, and we’ve shared quite a few of those with professional detailers simply doing their job. We’ve watched all kinds of classic vehicles enjoying their first bath in years, but today’s guest is probably the oldest one we've seen so far. It was born in 1929 and has had a life full of events.

The AMMO NYC team was invited to wash a Ford Model A and the video at the top of this page tracks the rescue process of the vehicle, which has been sitting abandoned for about eight years in Connecticut. The detailing specialists joined Ted, the owner of the vehicle, and pulled it out of the trees. Then, after a few small fixes, the 92-year-old Ford started its engine right up and was ready to be taken to the detailing garage. 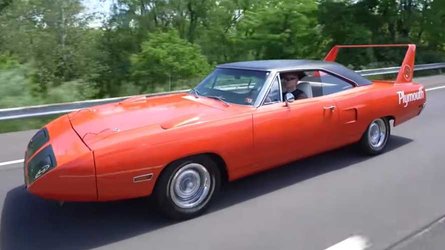 Before we move to the washing process, let’s clarify that this is not an original Model A. It’s the so-called Doodlebug Tractor, which was a cheap way to make a tractor back in the 1940s using the Model A or the Model T as a base. It was made by hand not using an existing transformation kit. The total cost of the transformation was around $20 at the time, which equals about $400 in the current economics.

Of course, the main idea here is not to make a full restoration of the vehicle but to give it a deep wash and a protection layer to slow down the rust at least a little bit. You know, just so it can serve for another 100 years or so. We are especially happy about the fact that the owner of this Model A decided to give it the wash it deserves and Larry from the AMMO NYC team is definitely the right specialist to do it.

“I just think this is awesome. I love the concept, I love the idea, I love the fact he [the owner] is going to use it again. I’m really excited,” Larry said. Oh, and there’s one washing method in the video that we’ve never seen before - washing with a scotch brite - and that’s another reason why this video is a real gem.