The electric sedan will also gain a new trim level.

It's going to be a busy Los Angeles Auto Show for Porsche as the peeps from Zuffenhausen will be hosting several world premieres. Chief of which will be the hardcore iteration of the 718 Cayman, the track-focused GT4 RS we've been spying on for as long as we can remember. 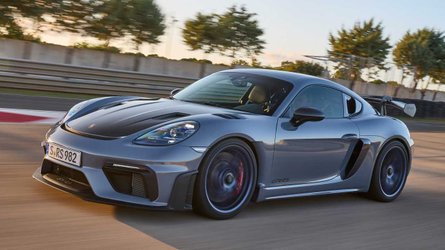 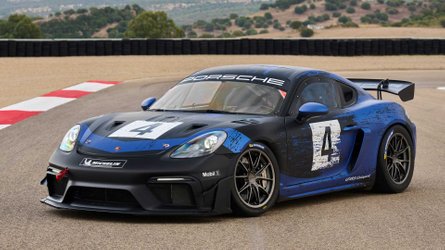 Speaking of which, the meaner and leaner machine was seen earlier this week devoid of any camouflage looking mighty aggressive with vented front fenders and a large rear wing.

Aside from bringing its top-tier Cayman to the City of Angels, Porsche will also expand the Taycan lineup with the addition of a "new, incredibly dynamic, drive variant" slotted between the 4S and Turbo. A quick look at the 911's family shows the GTS positioned above the 4S while remaining below the Turbo, so our money is on a Taycan GTS. We've found the 911 GTS to be the sweet spot of the family in our latest review, so we're anxious to see how the formula has been adapted for an electric sedan.

But wait, there's more. See that car hiding under a cover on the left side of the image? It's not the Taycan (GTS) sedan, but rather a third body style that will also be unveiled at the LA Show. Porsche doesn't go into any details, although it seems fairly obvious to us it's a Taycan wagon judging by the elongated roof. Our money is on a Sport Turismo to join the rugged Cross Turismo by eschewing the black plastic cladding and the jacked-up suspension for a sportier estate.

There is evidence to support our assumptions as both the Taycan GTS and Sport Turismo (also in GTS spec) surfaced earlier this year. While buying a new Porsche, a customer briefly saw the two models showing up on a salesperson’s computer screen. The information was published on the TaycanForum, but unsurprisingly, it was taken down shortly thereafter.

Check Out The New Taycan GTS: 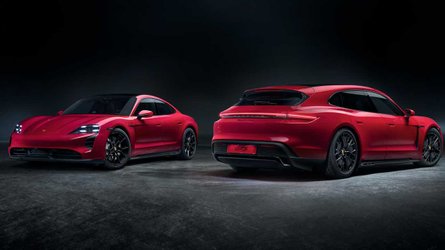 The 718 Cayman GT4 RS and the two new Taycan flavors will share the spotlight in LA with the recently unveiled Panamera Platinum Edition. The event kicks off November 17 and 18 with the press days, with the show opening its doors to the public a day later until November 28. Porsche says it will have a total of five premieres, and the fifth one will be the track-only 718 Cayman GT4 RS Clubsport.