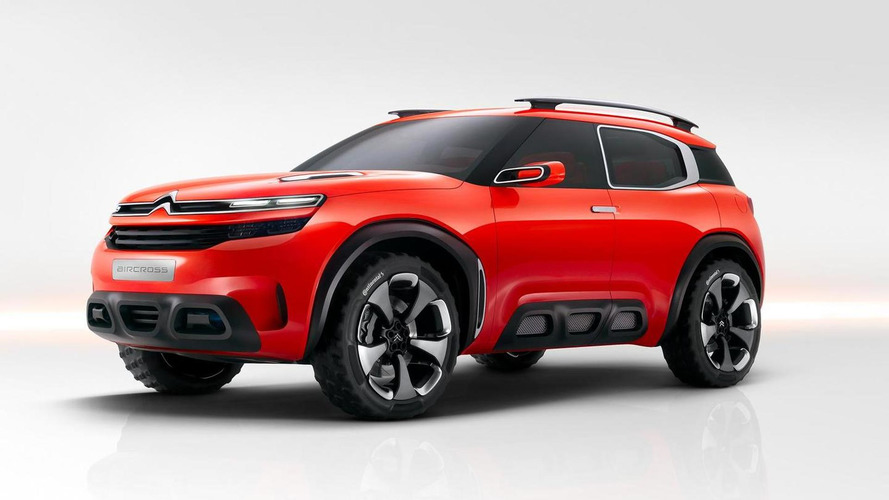 Following a couple of teasers and a leaked image, the Citroën Aircross concept has been fully revealed and it’s heading to Auto Shanghai 2015.

Following a couple of teasers and a leaked image, the Citroën Aircross concept has been fully revealed and it’s heading to Auto Shanghai 2015.

Significantly larger than the C4 Cactus, the Aircross concept is 4580mm long, 2100mm wide, 1800mm tall and rides on massive 22-inch alloy wheels. It adopts a bold yet quirky styling similar to the Cactus but on a larger scale as the model is almost as big as a Land Rover Discovery Sport or a Hyundai Santa Fe so a production version will be positioned above the Cactus.

Speaking of the Cactus, its airbumps have now evolved into "alloy bumps" produced from honeycomb aluminum castings which are surrounded by hard rubber, but it's unlikely these will be carried over onto a potential production model. Citroën has also added "air signs" (chrome rear window surrounds) and "air curtains" (front intakes) which are not just for design as the French marque says these boost aerodynamics.

Wearing a red orange paint, the Aircross concept adopts a plug-in hybrid setup with a front-mounted 218 bhp & 203 lb-ft 1.6-liter gasoline engine working together with a rear-mounted 95 bhp & 148 lb-ft electric motor. It also boasts a lithium-ion battery pack granting an electric range of up to 31 miles (50 km) while a full recharge will take three and a half hours from a regular household socket.

As far as the interior cabin is concerned, it's dominated by dual 12-inch high definition screens, one of which is actually mobile. Interestingly, each seat has speakers and microphone "to encourage dialogue between passengers" while accessing the rear seats can be done after opening the rear-hinged doors.

There's no word right now about a production version but Citroën says the Aircross concept illustrates the company's "international ambitions."