We hit Miami Beach for a brief drive in the latest Black Badge model.

The Black Badge moniker joined the Rolls-Royce lineup in 2016, first atop the Wraith coupe, followed by the Dawn convertible and Cullinan SUV, then with the last generation Ghost sedan. It’s five years later and the Black Badge trim is still proving hugely prosperous for the company; Rolls-Royce says that 27 percent of the vehicles it sells worldwide are now Black Badge models.

With that success in mind, the new and much-improved Ghost is the latest car to get the more sinister treatment. This is the 2022 Rolls-Royce Ghost Black Badge, and it builds on the success of Black Badge models before it by adding more power, enhanced styling, and as we found out firsthand in a brief drive along the beach, improved dynamics.

Powering the Ghost Black Badge is the same twin-turbocharged 6.8-liter V12 as in the base model. But now that engine delivers 592 horsepower (435 kilowatts) and 664 pound-feet (900 newton-meters), an improvement of 29 hp and 37 lb-ft over the base Ghost. It's paired to a reworked ZF eight-speed automatic with a "Low" mode – the Rolls equivalent of Sport – which applies power up to 50 percent quicker and is exclusive to all Black Badge models.

We got behind the wheel of the new Ghost Black Badge briefly – don't worry, a full first drive is coming later next month – and hustled the hefty sedan down a makeshift “drag strip” adjacent to Miami Beach. The power improvements were immediately noticeable; low-end torque was more plentiful, and it's available now at just 1,900 RPM. The engine made a slightly more aggressive sound, too, thanks to the upgraded exhaust, and there was a noticeable difference in low-end power application.

The Ghost Black Badge felt a bit better dynamically, as well. Engineers tweaked the suspension to help reduce body roll and made the steering heftier to help with responsiveness. We flung the four-door around an empty parking lot near the beach and the Ghost Black Badge displayed more composure and better agility than its non-Black Badge base brethren. We'd go so far as to call it "sporty," although Rolls-Royce probably wouldn't use that terminology.

Initial impressions suggest the Black Badge variant doesn't stray far from the standard Ghost in terms of looks. But peer closer and there are a few key components that help this version stand out. The high-spoke 21-inch wheels are an aggressive accouterment, featuring a carbon-fiber barrel that consists of 22 layers of carbon. The illuminated front grille from the standard Ghost also carries over, illuminating the vertical slats with 152 LED lights.

Draped over the sheet metal is a new "signature black" hue that Rolls-Royce says is the darkest in the entire industry. It starts with 100 pounds (45 kilograms) of paint, which the company atomizes before applying (twice) to the car, with four employees hand-polishing thoroughly. This process takes three to five hours to complete and results in that impressive depth.

Other than pure black, buyers can customize the exterior of their Ghost Black Badge with up to 44,000 different shades – counting two-tone paints, of course. And as with all Black Badge models before it, Rolls-Royce has darkened all the exterior badges, from the Spirit of Ecstasy on the hood to the double 'R' monogram in the rear. 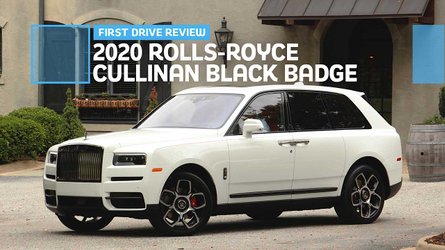 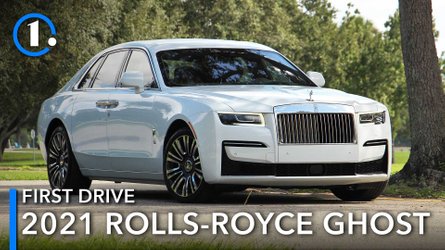 2021 Rolls-Royce Ghost First Drive Review: All That And Then Some

The Shooting Star headliner is still the star of the interior, but the Black Badge model swaps the illuminated "Ghost" motif on the passenger-side dash for a Black Badge infinity logo instead, with infinity logos also on the sill plates and elsewhere in the cabin. And as with any Ghost, the color combo of the seats is fully customizable in a few hundred different ways, including a bright neon teal finish found on this particular car.

The price? Just know that the Black Badge option is an extra $43,000 on top of the standard Rolls-Royce Ghost, which starts at $332,500. Buyers interested in taking home a brand-new Ghost Black Badge can begin commissioning their cars starting today.