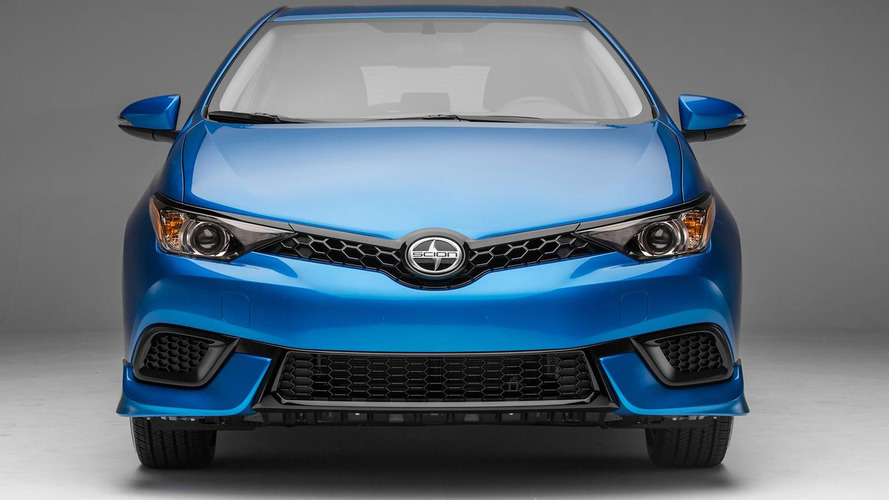 Scion has taken the wraps off the 2016 iM hatchback on the inaugural day of the New York Auto Show.

Scion has taken the wraps off the 2016 iM hatchback on the inaugural day of the New York Auto Show.

Previewed by a namesake concept late last year, the iM is basically an American version of the Toyota Auris so there's not much to talk about in terms of design albeit it looks slightly more aggressive and youthful. Scion says it will carry a starting price of less than $20,000 and will be equipped as standard with eight airbags, including a driver's knee airbag and a front passenger seat cushion airbag. All versions come with a standard rear double wishbone suspension and 17-inch wheels wrapped around in 225/45 R17 tires.

The "sporty" five-door hatchback will be powered exclusively by a 1.8-liter DOHC Valvematic four-cylinder gasoline engine developing 137 bhp (102 kW) which will allow the iM return an estimated 37 mpg (44.4 mpg UK or 6.3 liters / 100 km) on the highway. The engine works as standard with a six-speed manual gearbox but for more money Scion is offering an optional seven-speed CVTi-S which they say has been "sport-tuned for driving pleasure" and benefits from manual shifting capabilities as well as a Sport mode.

Scion has equipped the 2016 iM with an acoustic layer windshield, floor silencer sheets and foam-type insulation to grant a quieter cabin where there's a seven-inch Pioneer Display Audio unit from which the driver can control the six-speaker sound system also provided by Pioneer. The steering wheel has been wrapped in leather while between the main instrument gauges is a 4.2-inch TFT multi-info display showing various functions.

The list of equipment is quite generous for this price tag as the five-door hatch gets standard dual-zone automatic climate control system, heated power-folding mirrors and automatic headlights. At an additional cost, the iM can get a navigation system, body graphics, interior light kit, all-weather floor mats as well as an array of performance accessories from Toyota Racing Development (TRD) such as an air intake system, lowering springs and an anti-roll bar.

Deliveries of the 2016 Scion iM are scheduled to kick off this fall.