Despite being largely based on the Volkswagen Passat, the Arteon is sold in Europe as an executive car, which is a segment above the mid-size D-segment cars. Kia’s Stinger is just about 35 millimeters shorter than the Arteon, though it is positioned in the D segment. While the Volkswagen is categorized as a more luxurious model, it lacks six-cylinder engines even in its range-topping form.

The Arteon R has a 2.0-liter turbocharged gas engine good for 320 horsepower (235 kilowatts) and 310 pound-feet (420 Newton-meters) of torque. The power is channeled to all four wheels through a seven-speed dual-clutch automatic gearbox with a launch control function. Is that enough power for the performance Arteon to conquer the V6-powered Stinger GT?

A new video from Carwow wants to answer this question and uses an Arteon R Shooting Brake for a drag race against the said Kia. The South Korean competitor comes with a 3.3-liter V6 engine delivering 367 hp (274 kW) and a respectable peak torque of 376 lb-ft (510 Nm). It may have more power, but is also heavier and, in this case, driven only by its rear wheels. As a side note, the Stinger GT is available with all-wheel drive in the United States, but not in the UK.

No Arteon R In The US: 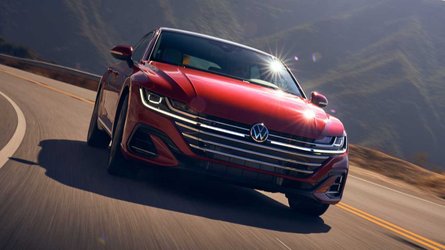 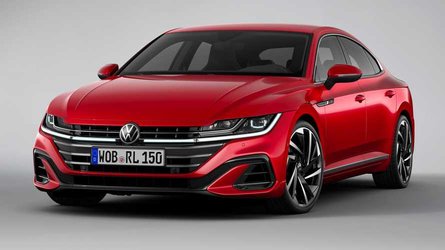 2021 VW Arteon Lands In The US With Price Bump, No Shooting Brake Or R

So, what is more important in a wet drag race - power or traction? We’d say both but in this case, it turns out traction is more important. It seems that the car that is on the right side has a little advantage because the track is a little drier there. However, all three races have the same winner.

As a final note, it’s worth mentioning that the Stinger could be discontinued after the 2022 model year in the United States. The information was not confirmed by the South Korean automaker, though it seems that the relatively slow sales in the country are the motivation behind Kia’s decision. We are yet to hear an official announcement, though.