There are not one, but two shocking aspects to this classic Porsche crash video. The first is the amount of damage sustained on this 962C race car considering its speed at impact. The second is, thankfully, the driver reportedly suffered no major injuries. Anyone who knows the 962C knows that's a very big deal. More on that in a bit.

Pushing The Classics A Bit Too Hard: 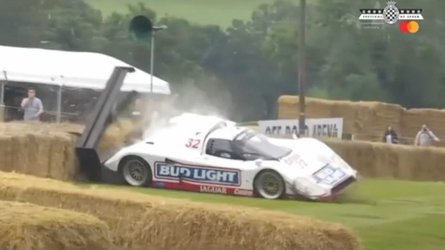 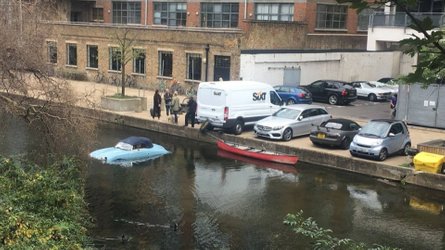 Porsche 356 Replica Ends Up In Water After Parking Mishap

This video comes from Auto Addiction, and it captures a recent event at Spa-Francorchamps. We don't know the specific event or the date this happened, but that doesn't matter in the long run. This 962C just passed Chicane and was approaching the start-finish line at the infamous track when the backside stepped out, sending the car nose first into the wall. The impact completely destroyed the Porsche's front clip, and if the visual isn't bad enough, the sound of bodywork snapping is the stuff of enthusiasts' nightmares. The doors were even ripped off as the car came to rest on the front straight.

Fortunately, there weren't other cars near the 962 when the crash occurred. Footage after the impact shows the car being loaded onto a flatbed, with a person that looks like the driver picking up some pieces along the wall. As far as we can tell, the driver was accelerating out of Chicane when the boost from the twin-turbocharged flat-six came on like a wrecking ball. You can hear the engine suddenly gain RPM just before the rear steps out, and though it looks slow, the camera is some distance from the action. It's not a fast impact by racing standards, but that's still likely a 60 mph hit at least.

The Porsche 962 was developed in the early 1980s and began racing in 1984. Based heavily on the 956 race car, its longer nose and integrated steel roll cage were implemented for safety reasons, but the cockpit still wasn't a good place to be in a crash. Legendary racer Stefan Bellof was killed in a 962 during a 1985 race, two years after setting the overall Nürburgring record in a 956C that stood for 35 years. Ironically, Bellof's fatal 962 crash also occurred at Spa.